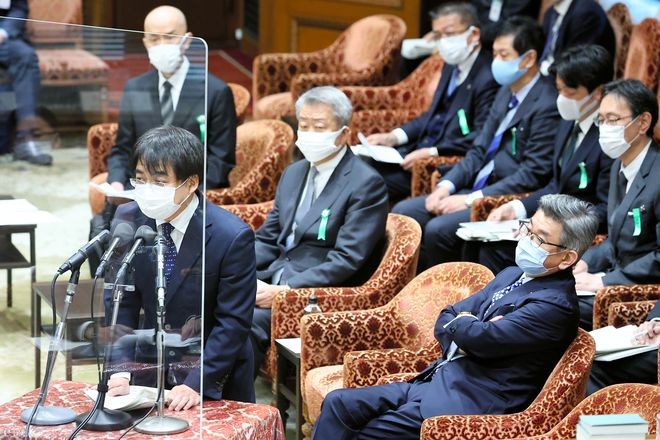 Shinya Suzuki, the ministry’s director-general of the radio department responds to a question during a session of the Lower House Budged Committee on March 16. Telecommunications minister Ryota Takeda, right, sits behind him. (Kotaro Ebara)

In the classic Japanese manga series "Doraemon," Gian and Suneo are bullies who think they can always browbeat their hapless friend Nobita into submission. One day, they order him, "Go to the bakery and bring us some bread pronto."

The eponymous robot cat protagonist takes pity on Nobita and gives him a set of magic "class emblems."

Here's how they work: If you stick an emblem on someone's back representing a class lower than your own, that person will start doing your bidding without fail.

Nobita, wearing the emblem of General, gives Suneo the rank of Private First Class, and that of Private Second Class to Gian.

He barks his orders, loud and clear: "About face!" "Fifty laps around the town, on the double."

When telecommunications minister Ryota Takeda uttered his remark, was that meant as an order to the ministry's senior officials who were all wearing their "class emblems"?

"Say you have no recollection," someone is heard ordering to Shinya Suzuki, the ministry’s director-general of the radio department, as he was about to take the floor in the Diet to answer questions.

The voice was recorded in live video footage of this Diet session.

Takeda initially denied the voice was his. But upon further questioning on March 19, he admitted it was, insisting he uttered those words "without awareness."

I listened to the voice again. It was low and menacing, and spoken fast.

Was Takeda alarmed that his subordinate might lose his nerve in the rapid-fire questioning?

With Takeda directly voicing a reminder, Suzuki restated, "I have no recollection."

This was a textbook example of a painfully loyal "bureaucrat's response."

In a magazine interview three years ago, Takeda spoke passionately about how a politician is expected to behave.

"You need to listen to people who don't speak up," he pontificated. "You mustn't listen only to people with big mouths."

I agree. But obviously, there are also things a Cabinet minister shouldn't order loudly to their subordinates.

Doraemon has a nifty gadget called "kokoro no koe no supiikaa"--something like "a speaker that reveals someone's true thoughts and feelings."

Used like a stethoscope, it immediately picks up the person's innermost voice.

I wish I could place it against the chest of every senior official of the telecommunications ministry who has been caught in the chain of responding, "I have no recollection."