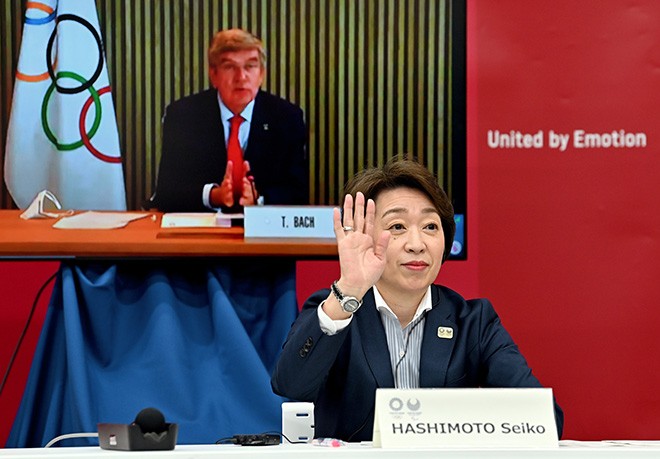 Seiko Hashimoto, president of the Tokyo Olympic organizing committee, at a video conference in Tokyo on March 20. Seen behind her is Thomas Bach, president of the International Olympic Committee. (Takuya Isayama)

Japan's decision to bar international spectators at the Tokyo Olympics is a bitter pill for the government to swallow in light of its earlier hopes of hosting the events in their entirety to help kickstart the battered tourism industry.

Senior officials of the Tokyo Olympic organizing committee had been raising concerns since early January about allowing overseas spectators following a spike in COVID-19 cases in Japan.

A second state of emergency over the public health crisis was issued for Tokyo and other heavily-populated areas on Jan. 7 after the capital logged more than 2,000 new cases in a single day, the highest level to date.

“Japan should give up plans to allow international spectators to attend the Olympics,” said one ranking committee official at the time. “But the decision rests with the government.”

Late last year, the Tokyo metropolitan government and the organizing committee agreed with the central government that it must decide by spring 2021 whether to allow international spectators.

The sports extravaganza, already delayed by a year because of the pandemic, is scheduled to start in July.

Delaying the decision on whether foreign spectators could attend was considered a major misstep in light of the difficulties committee officials expected to face in fleshing out details of safety protocols without knowing how many fans would be at the events.

In addition, arranging refunds for 630,000 tickets assigned to international spectators is expected to prove an exacting task due to the presence of numerous brokers involved in ticket sales overseas.

Many organizing committee workers voiced hopes that the central government will make a swift decision on whether visitors from overseas could attend the Summer Games.

But central government officials leaned toward waiting until the last minute because Prime Minister Yoshihide Suga was intent on using the Olympics as a springboard to revive inbound tourism and lift the Japanese economy.

For this reason, the central government initially envisaged exempting international spectators from two weeks of mandatory self-isolation after their arrival in Japan and allowing them to use public transport.

It also approved the development of a system that monitors people's health through the use of face recognition technology and a smartphone app.

But public sentiment against holding the Olympic Games gathered steam after variant strains of the novel coronavirus began spreading around the world late last year.

In February, Japanese officials began discussing holding the events without spectators from overseas as the only realistic response.

On March 3, Suga announced the central government’s policy to extend the state of emergency to March 21 for the Tokyo metropolitan area and three neighboring prefectures from the initially scheduled March 7.

Suga favored lifting the declaration right before his announcement but was forced to do an about-face after local governors expressed caution.

At this point, central government officials realized that holding the Olympic with spectators from overseas was no longer a viable option.