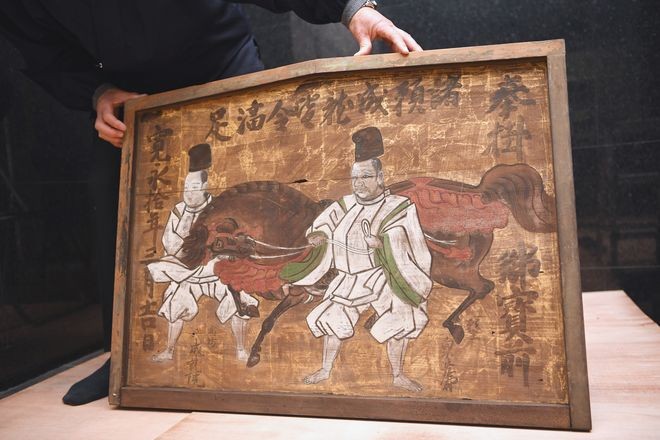 An “ema” prayer tablet found in the Hondo main hall of Kiyomizudera temple in Kyoto seen on March 9 is believed to have been offered about 400 years ago. (Kenta Sujino)

KYOTO--A large “ema” votive tablet dedicated about 400 years ago to Kiyomizudera temple was found hidden in the Hondo main hall at the World Heritage site.

It would have remained concealed at the hall, a designated national treasure, had it not been for extensive restoration work at the temple that was completed in late February. Some other surprises were also revealed in the large-scale project.

Measuring about 60 centimeters by 80 cm, the wooden tablet features a vivid illustration of two men leading a horse on each side. It also says, “A fine day in March, Kanei 10 (1633).”

The illustration is unsigned.

“With their leg hair and other details drawn in a bold manner, the illustration is close to the style of Kano Yasunobu (1614-1685) of the Edo-Kano school,” said Shunroku Okudaira, a professor emeritus at Osaka University specializing in art history.

The Hondo main hall was lost in a great fire in 1629. It was rebuilt by Tokugawa Iemitsu, the third shogun of the Tokugawa Shogunate, in 1633. According to the date on the tablet, it was dedicated to the temple nine months before the rebuilding was completed.

“The gold leaf remains beautiful, and the colors are vibrant. The face of the horse is also detailed," said Teruhisa Sakai, 72, a curator at Kiyomizudera temple.

The newly discovered ema tablet is the third oldest among those kept by the temple that survived another great fire in the Kanei era of the Edo Period (1603-1867). The two oldest pieces are both government-designated important cultural properties.

The tablet was placed behind a wooden plaque measuring 2.7 meters by 9 meters that was hung on the south wall of the Hondo hall. The plaque features an illustration by Edo Period painter Kaiho Yusetsu depicting the punitive expedition of Sakanoue no Tamuramaro.

Kiyomizudera temple had been under renovation since 2008 to repair the Hondo hall and eight government-designated important cultural properties, including the Amidado and Okuno-in halls. It was the first extensive project conducted in several hundred years to fix every corner of the main hall. The ema tablet was discovered because no spot was left untouched.

The temple is believed to have disposed of many votive tablets in the Meiji Era (1868-1912).

“Someone who realized that it was old and valuable might have secretly kept it behind (the larger plaque),” Sakai said.

The renovation work also led to the discovery that Hakuin Ekaku, a Zen monk who revived the Rinzai sect of Buddhism, did not create a wooden framed calligraphy sign hung on the east side of the Hondo hall as was long believed.

The sign reads, “Jigenshishujo, Fukujukaimuryo (Kannon Bodhisattva is watching us with her affectionate eyes, and the happiness brought by her is infinite like the ocean).”

When it was removed to repaint the wall, writing on the back of the sign was found that said it was the work of Osaka-based calligrapher Sawai Senseki in 1760.

“We don’t know why the wrong information had been passed down for generations,” said Sakai, adding that a correct explanation signboard is being planned.

In addition, 716 wooden tags given to pilgrims by 33 Buddhist temples associated with Kannon Bodhisattva in the Kansai region during the Edo Period were found to be from “nageshi” tie beams and other parts of Hondo hall.

Kiyomizudera, the 16th temple on the pilgrimage route, had regularly incinerated these tags that were pasted on pillars and other spots by pilgrims.

“Pilgrims might have hidden them to prevent them from being burned,” Sakai said.