360-DEGREE LIVES: 200 budgies living their lives in ‘paradise’ in Yokohama 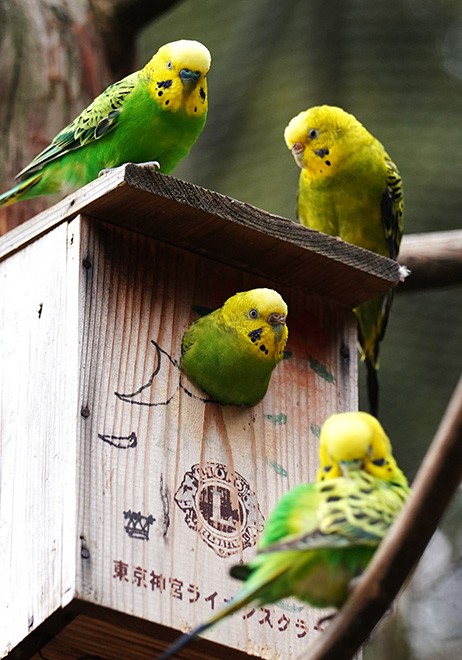 Behind the door to a large outdoor cage, tiny birds in shades of greenish yellows, blues and other colors perch, flutter and chirp.

The facility at the Snow Brand Kodomo-no-Kuni Ranch in Yokohama’s Aoba Ward, which measures roughly 330 square meters in size, is home to about 200 budgerigars, commonly known as budgies, according to attendant Haruki Sugita.

There are aisles inside the cage so visitors can look up close. But the chatty birds don’t hop on their shoulders or hands, or mimic human speech like pet parakeets.

Budgerigars are small birds, usually about 20 centimeters long. They live in groups in grasslands, wooded areas and other parts of arid regions in Australia.

The birds are robust and can be easily tamed, making them a popular pet. They communicate with each other by chirping.

The original species is green in color, while those in blue, purple, yellow and white have been genetically modified.

It is easier to tell if a budgie is male or female by appearance when it grows into an adult. Generally, the cere, or the area at the base of the bird’s beak, is blue in males, while the color is pink in females.