EDITORIAL: U.S., China should bolster dialogue to cool down tensions 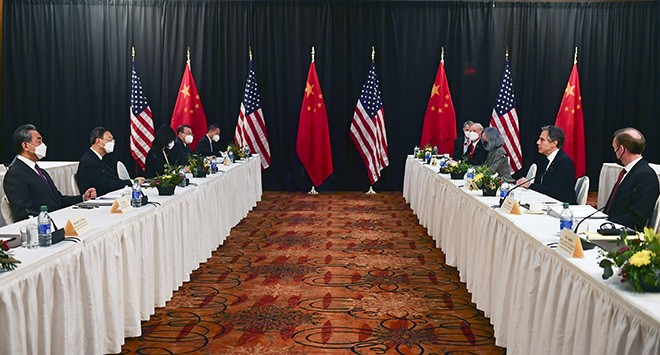 The heated exchanges at the outset of the meeting in Alaska on March 18 have made the world concerned about the relationship between the two biggest powers becoming more confrontational.

In front of media representatives, U.S. officials criticized Beijing’s coercion and threats, while their Chinese counterparts accused Washington of protocol violations and hypocrisy.

Both sides probably tried to show to their respective audiences at home that they are taking a hard-line stance toward the other party.

The United States does not want to show any signs of weakness following a change in administrations, while Beijing is preparing for the 100th anniversary of the founding of the Communist Party of China in July.

U.S. media reports said, however, the closed-door discussions that followed the unusual clash at the start of the two-day talks were relatively cool-headed.

The Biden administration plans to seek cooperation with China over such issues as climate change and Iraq’s nuclear program.

China, for its part, likely intends to avoid excessive tensions with other countries as it tries to nurse its domestic economy back to health.

In the face of a raft of global challenges, the reality is that neither the United States nor China can afford to sever their mutual dependence.

No party in the international community wants to see the two countries spiral into a head-on confrontation.

Washington and Beijing should expand dialogue as much as possible and continue efforts for better communication to stabilize their relationship, which will define much of the international landscape in the current century.

World history shows confrontation between the existing power and an emerging challenger to its hegemony is, in many cases, inevitable.

The latest U.S.-China exchanges offered insights into how China, which has grown in national strength, views the world.

“The United States itself does not represent international public opinion, and neither does the Western world,” Yang Jiechi, China’s top diplomat, said during the meeting.

His remark was apparently aimed at stressing the superiority of an authoritarian rule such as China’s.

But the international community should not overlook Beijing’s claims along this line of argument to justify its iron-fisted approach toward issues concerning the Uighurs in China’s Xinjiang region, the pro-democracy movement in Hong Kong and its relationship with Taiwan.

The international community is facing a vital test of its commitment to maintaining democratic standards on human rights and the rule of law.

During their visits to Japan and South Korea over the past week, senior U.S. officials made it clear that the Biden administration is giving priority to U.S. relations with its allies.

The policy shift should not only serve U.S. interests but also help secure a healthy world order.

The United States should not repeat the kind of self-righteous attack on China by the administration of Donald Trump.

Washington should carefully coordinate its policy toward China with its partners, such as Japan, South Korea, Australia, India and Europe.

Japan is also facing an urgent need to reconsider its policy toward China. Beijing has ratcheted up its rhetoric against Japan after Japan and the United States expressed concerns about China’s maritime activities in a joint statement following a meeting of their foreign and defense chiefs in Tokyo.

Under the banner of a “free and open Indo-Pacific,” Japan has been seeking to rally countries for a diplomatic initiative to counter China’s increasing assertiveness.

While enhancing its cooperation with Washington under the framework of its “value-based” diplomacy, Tokyo should also embark on its own independent dialogue with Beijing.

Japan needs to explore ways to work with China and at the same time convey its concerns to Chinese policymakers to help build an international order that peacefully includes China.