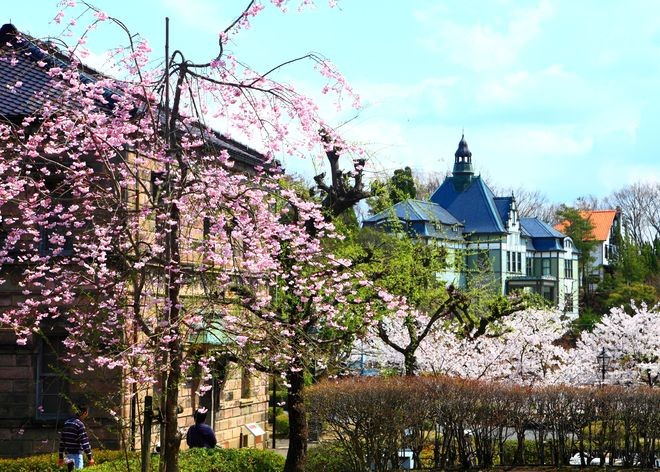 rippling waves
you teach me how
to film the wind
--Debbie Strange (Winnipeg, Manitoba)

The photo-haikuist, who goes by the pen name Kai, received an award for excellence in the 10th Setouchi-Matsuyama International Photo-Haiku Contest for three lines inspired by pink blossoms in a photo titled “A Glorious Spring Day” taken by the tourist office in the city of Inuyama, Aichi Prefecture. Srinivasa Rao Sambangi from India also won an award for excellence for a haiku that matched well with a photo of a special observation path alongside the reconstruction site for Kumamoto Castle which was displayed online by contest organizers. A university student from Kagoshima, Ryuto Sakamoto, received an honorable mention for having composed a poem to complement a photo of the remains of an outer moat at Edo Castle in Tokyo’s Shinjuku Ward.

guarded castle
a tremor opens the door
to moon

When the sun sets
Another city floating
In the river

In all, the contest attracted 4,113 artistic works. Winners of four grand prix and eight awards for excellence in the Japanese and English language categories were congratulated by Yoshinori Yuasa, the contest co-host at the Asahi Culture Center who also notified them of gifts and certificates. In addition, 32 honorable mentions were made. Notably, 1,587 contestants wrote in English.

The 10 haiku shown at the top of this column were entered into a category that requested contestants to also take a photo of the sea. A grand prix was given to Debbie Strange whose three-line narrative above was combined with a brilliantly colored picture of conifers on an island surrounded by a smooth water surface that had just been gently touched by a rippling wind.

In a category that asked contestants to write about one of 12 photos of Japanese tourist spots provided by the organizers, John Hawkhead was prompted by a view of two mandarin oranges placed side by side atop a mooring bollard. The talented haikuist used personification to create this calming moment of inner reflection to win one of the four grand prizes.

sitting together
we share a quiet moment
in different dreams

Marion Clarke from Warrenpoint, Ireland, was honorably mentioned for this timely haiku that matched a photo of tourist rickshaws parked in front of Dogo Onsen, a famous hot spring in Matsuyama.

Monica Wang from Dusseldorf, Germany, was tickled by a photo of an egret feather that had fallen into a green rice field.

Kanchan Chatterjee from Jamshedpur, India, studied the history of a Buddhist monk known posthumously as Kobo Daishi of Monjuin in Matsuyama.

autumn begins…
starting my Sanskrit lessons
with the word “Karma”

Ann Magyar from Boston, Massachusetts, was lulled by a photo of the sea to write this poem.

Taiga Terahara, who goes by the pen name Gege, from Japan thought of this haiku while watching a golden sunset slip into the Arasaki coastline off Yokosuka, Kanagawa Prefecture.

Migration
Sunlight over the sea
Dazzling

Pia Medrano, also from Japan, was inspired by a sculpture of Takasaka in Higashi-Matsuyama, Saitama.

Waiting to meet
the old man
practices his smile

Patsy Turner from Akaroa, New Zealand, recognized the 75th anniversary of the bombing of Hiroshima.

the shadows
on your doorstep
Hiroshima

Sebastian Chrobak from Poland was honorably mentioned after he prayed these words while viewing a photo of Hokiji temple in Ikaruga, Nara Prefecture.

omikuji
he leaves the future behind
on a pine tree

Congratulations to everyone who contributed to the success of the 10th Setouchi-Matsuyama International Photo-Haiku Contest in cooperation with The Asahi Shimbun.