SUMO/ Small vs. small matchup comes up big with the spectators 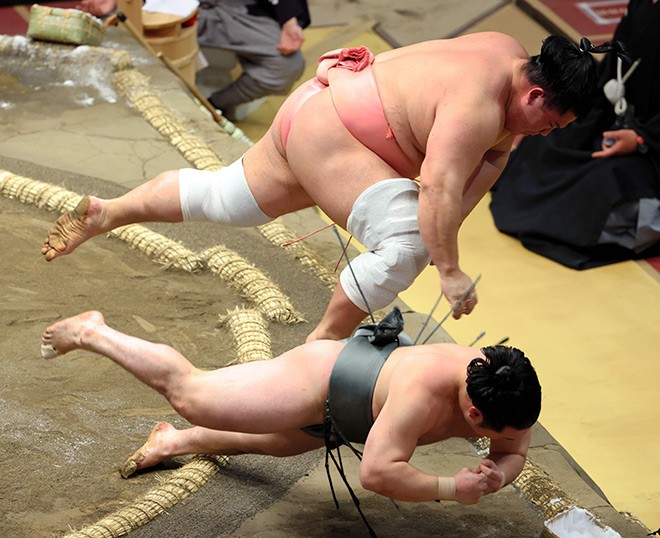 Ura, above, pushes down Enho and wins their match in Day 8 on March 21. (Toshiyuki Hayashi)

For one day, two of the smaller sumo wrestlers overshadowed their larger counterparts in a highly anticipated matchup that entertained spectators at Ryogoku Kokugikan in Tokyo.

Enho, 26, and Ura, 28, both competing in the second-tier juryo division, generated the big buzz as they competed in the Spring Grand Sumo Tournament on March 21.

Enho, 168 centimeters and 100 kilograms, and Ura, 176 cm and 143 kg, both have gained large followings due to their acrobatic sumo styles. The matchup was their first in the professional ranks.

The match was so heated that the outcome was in doubt until the final moment and even for an extended time afterward.

“I felt that the loudness of the applause was totally different from that of other matches,” Ura said.

When both wrestlers entered the dohyo, they raised the electricity level in the venue.

At the initial charge, both wrestlers came out fast and low.

Enho lowered his body and tried to grab Ura’s belt. But Ura refused to let him get a grip.

They pushed each other, and Ura fended off Enho’s pulling technique and rushed toward him.

Enho fell back off-balance and tried to dodge Ura on the edge of the ring. But first Enho and then Ura were thrown out.

The referee ruled that Ura had won. Although the ringside judges conferred for a long time in the center of the dohyo, they did not overturn the result. Spectators grew excited about the possibility that the two wrestlers would have a do-over, but in the end, Ura was judged the victor.

“If I had to have a rematch, I could have not prepared myself to do so again mentally,” Ura said. “I was glad that I could win with only one match.”

Both wrestlers stood at 6-2 as of Day 8 of the 15-day tournament, tied at the top in the juryo division.

The meeting marked the first between the two since their school days.

“How many years have passed since?" Ura said. "That match experience didn't help at all."

In the dohyo on this day, Ura admitted to being a little intimidated.

“He rushed toward me with such a small body, and I was scared of him in a different sense from other bigger wrestlers,” Ura said. “Enho had a kind of scary aura.”

Enho was left to ponder the need to improve his sumo after his loss.

“I was totally defeated,” he said. “I have to get stronger. I am not strong enough yet.”

Enho could take solace in that he was finally able to compete with Ura in a match that he has longed for from even before he entered his stable.

“Ura’s level of sumo is great. I entered the professional world because I watched his sumo,” Enho said before the match.

After the match, he said, “Honestly, I thought that I could not compete with him at all. I was able to show my power and skills against him to more of an extent than I expected, so those were good things.”

Their legions of fans can look forward to watching their matches in the future as their budding rivalry promises more fireworks.

“I would like to have my next match with him in the top (makuuchi) division,” Enho said.