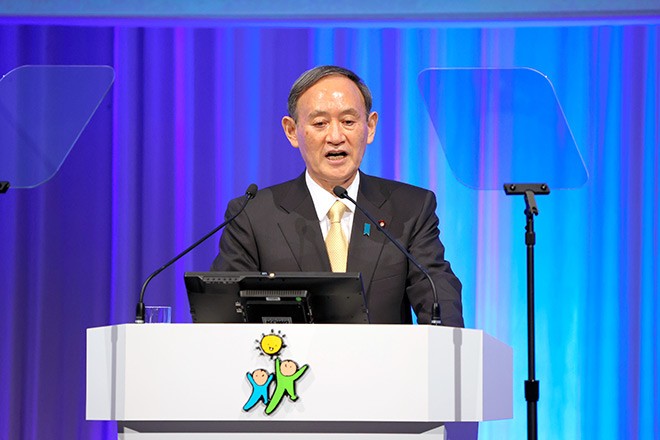 Prime Minister Yoshihide Suga called on his Liberal Democratic Party lawmakers to unite at a party convention on March 21 as LDP factions are increasingly vying with each other in fielding candidates for the Lower House general election this year.

The election must be held by October, when the four-year terms of members of the Lower House expire.

“The general election must take place by autumn at the latest,” Suga said at the convention held at a Tokyo hotel. “I am determined to spearhead the party to fight through the end.”

One of the problems the ruling party needs to sort out soon is there are more than 10 single-seat constituencies in which it has not settled on a candidate to run.

This is partly because the Nikai faction, led by LDP Secretary-General Toshihiro Nikai, is trying to field candidates in as many constituencies as possible to widen its clout.

Nikai is a key figure underpinning the Suga administration. He was among the first heavyweights to back Suga’s bid to run in the LDP presidential election in September.

But Nikai isn't the only LDP leader overstepping their usual turf.

Fumio Kishida, a former foreign minister who unsuccessfully ran in the LDP presidential race, is aiming to field a senior member of his group in the Yamaguchi No. 3 constituency, where a veteran politician and Nikai’s close ally has long served.

In other electoral districts, the problem isn't too many candidates, it's that there aren't any at all.

Some have no LDP lawmakers representing them since those that did have been forced to resign due to scandals.

Taimei Yamaguchi, chairman of the LDP’s Election Strategy Committee, said he hoped the party would finish selecting candidates before late April, during an appearance on a TV show on March 14.

But picking a single candidate when LDP factions are pressing hard for their own members won't go as smoothly as the party hopes, observers said.

If and when Suga will call a snap election has been a matter of intense speculation.

Dissolving the Lower House in April for a snap election would be a “good move,” one longtime LDP lawmaker said.

“The Suga administration will likely be receiving high marks” in April, the lawmaker said.

Suga is scheduled to meet with U.S. President Joe Biden in the first half of April, becoming the first leader of a nation to hold a summit with the new president in person.

At the LDP convention, Suga boasted of the scheduled meeting with Biden as “proof of the Biden administration highly valuing its relationship with Japan.”

He told the convention that he would reaffirm cooperation between the two countries during talks over such pressing issues as the coronavirus pandemic, climate change, policy toward China and abduction of Japanese citizens by North Korea.

Japan is also expected to begin inoculating the elderly in April against the novel coronavirus.

The LDP can take advantage of those events to help the party cast a positive light before the Lower House election.

Hiroshi Moriyama, chief of the LDP’s Diet Affairs Committee, did not rule out the election in April when asked for his take on March 18 during filming for a TV show.

“We cannot entirely deny it,” he said. “Many things could happen.”

But Suga denied he would call a snap election right after his return from the visit to the United States, speaking at a news conference on March 18.

“I am not thinking about the election at all, such as holding it after my visit to the United States,” he said. “My top priority is to bring the pandemic under control.”

(This article was written by Takahiro Okubo and Yuichi Nobira.)