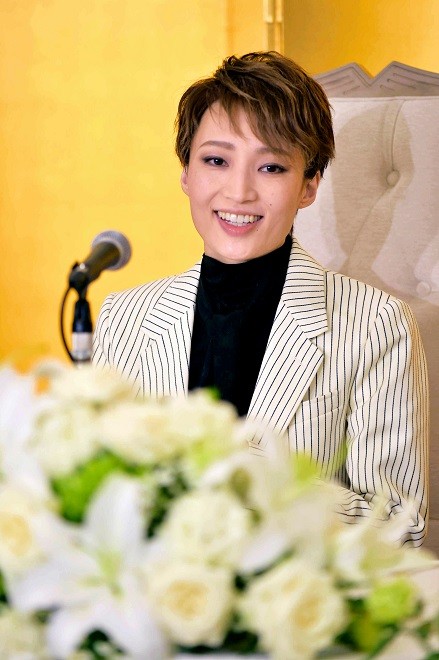 The duo bid farewell to their home ground, the Takarazuka Grand Theater here, on Feb. 8.

Nozomi announced her retirement about a year ago. The closing day of her farewell show in Tokyo was initially slated for October last year, but the schedule was pushed back by half a year after the troupe was forced to either cancel or postpone its performances because of the novel coronavirus pandemic.

The final show of Nozomi and Maaya at their home turf began at 4:20 p.m.

Dressed in black, Nozomi sang songs from “Don Juan” in a sensuous voice, holding flowers in her hand.

She went on to sing “Home” from “Phantom” with Maaya, both dressed in snow crystal-themed pale green costumes.

At the end, the duo belted out “Music is My Life” with all members of the Snow Troupe joining in chorus.

A total of eight Snow Troupe members retired after the show.

“I’m overwhelmed with lonely and happy feelings right now,” she told the audience.

“I have been the world’s happiest ‘musumeyaku,’ standing next to Nozomi,” she added, referring to actresses assigned to play roles of young women.

Nozomi opted to dress in a black tailcoat, the formal attire for actresses assigned to play male roles.

Holding a bouquet of red roses, she told the audience that she had decided earlier to “graduate,” but then the pandemic spread, and she made up her mind to accept whatever fate she may face.

“My fellow members of the Snow Troupe who have always believed in me and followed me with a smile, my precious peers and Maaya, who has always escorted me throughout my journey with a big smile on her face ... I love you all,” she said.

Nozomi, in tears, went on to thank her fans for their support before adding with a big smile: “I just want to see you. I’m dreaming of a day when we can laugh with each other.

“Today, Futo Nozomi is graduating from my beloved Takarazuka Grand Theater. Thank you so much.”

Under normal circumstances, several thousand fans would gather around the theater to show their appreciation for their idols when they exit the venue.

But the event, known as “parade” among fans, was canceled because of the COVID-19 pandemic.

Many Takarazuka groupies had to watch a live stream of the retiring stars’ show at movie theaters across the country.

A 28-year-old Osaka woman who is a big fan of Nozomi attended a live-streaming event at a cinema in the city’s Umeda district. She had planned to see Nozomi’s performance at the Takarazuka theater.

“My heart is with the Grand Theater,” the woman said. “I hope she will perform her remaining shows in Tokyo without trouble every single day.”

The stars’ final shows, which kicked off on Feb. 26, will run until April 11.

The Takarazuka Revue made its debut performance in 1914. All roles are played by women.