VOX POPULI: Parents working at home during pandemic a real boon for the kids 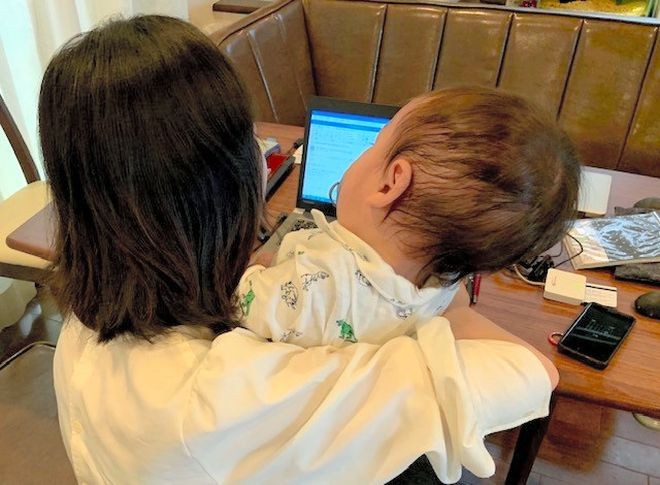 A woman works from home while holding her baby. (Asahi Shimbun file photo)

"Papa no Uta" (Dad's song), sung by rock musician Kiyoshiro Imawano (1951-2009), starts with this unflattering depiction of Dad: "At home he's like a sea lion/ vegging out and yawning.

"But," it continues up-tempo, "Dad's a bit different during the day/ Daytime Dad shines/ Daytime Dad works up a good sweat."

This was a construction company's TV commercial song in 1990.

It feels quite dated today for focusing only on men's work. But back then, the song grabbed popular attention and became a hit, probably because children hardly ever got to see their fathers at work.

But with more people working from home now, children are beginning to see their fathers and mothers in that situation.

One outcome of this change has become evident in the latest survey results of what elementary school children want to be when they grow up.

For boys, their No. 1 dream job last year was "a pro soccer player." This year, it was replaced by "a company worker," topping the second-place "YouTuber" by a small margin.

The Dai-ichi Life Insurance Co., which conducted this survey, believes this owes to "youngsters feeling an affinity for company workers as a result of watching their parents working from home."

There was a time in the past when "salaryman" (company worker) made the top 10 list, but not in recent years.

And "a company worker" was the No. 4 choice of girls this year, too.

The separation of one's place of work and home is a clear characteristic of modern society.

According to Iain Gately's "Rush Hour: How 500 Million Commuters Survive the Daily Journey to Work," the occasional outbreaks of cholera in Britain in the 19th century were blamed on unsanitary conditions in London.

This heightened the public's desire for suburban living, which was made feasible by the newly developed steam engine technology.

Today, high-speed internet enables people to work from home to protect themselves during the novel coronavirus pandemic.

It may seem like an exaggeration to say, but the current re-closing of the distance between one's home and place of work represents a historical transformation.

I think this needs to be valued as a blessing, whether a state of emergency is in effect or not.