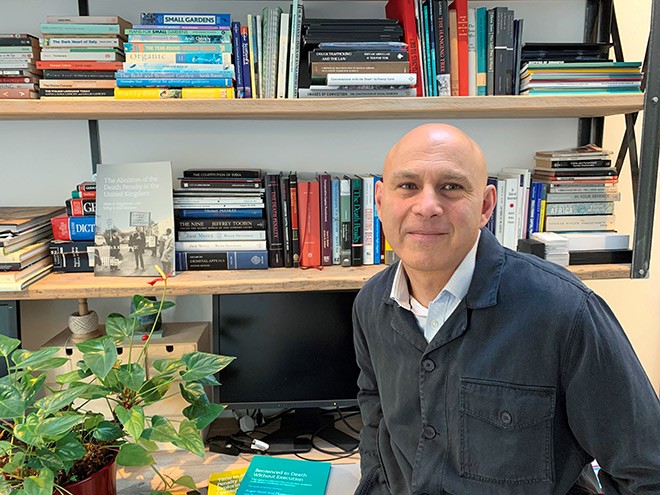 A London-based lawyer at the forefront of international efforts to abolish capital punishment has criticized Japan for its retention of the death penalty and said the country’s rationale for keeping it is flawed.

“Why has Japan not moved away from the death penalty?” asked Saul Lehrfreund, the 53-year-old co-founder of the Death Penalty Project, an international nongovernmental organization based in London, during an online interview with The Asahi Shimbun in February. “That is the question that needs to be discussed in Japan.”

Capital punishment has been either abolished or suspended in more than two-thirds of countries around the world.

Lehrfreund has visited Japan on at least eight occasions during the past 15 years to give talks and coordinate research studies. In March this year, he served as an online speaker at a meeting titled, “The death penalty: a global perspective,” on the sidelines of the U.N. Congress on Crime Prevention and Criminal Justice held in Kyoto.

Although Britain has abolished the death penalty, some of its former colonies still retain capital punishment and rely on the country’s Judicial Committee of the Privy Council as their highest court of appeal.

Lehrfreund was a student of international human rights law and has made it his life’s work.

He works with lawyers from different nations to devise courtroom strategies and create judicial precedents that constrain the application of the death penalty, including a ruling that found the system of a mandatory death penalty for certain types of crimes is unconstitutional.

“The death penalty is a punishment which is incompatible with fundamental human rights protections,” Lehrfreund said.

He cited a number of problems that accompany the death penalty, such as miscarriages of justice, cruelty, unfair proceedings and the disproportionate concentration of capital punishment on people from marginalized or disadvantaged backgrounds.

Japanese government officials and lawmakers argue the country retains the death penalty because the majority of the public are in favor of it.

Lehrfreund said, however, that a study published by the Death Penalty Project found that Japanese people form their views on the death penalty with limited information.

The 2015 report of the study by researchers Mai Sato and Paul Bacon, titled “The Public Opinion Myth: Why Japan Retains the Death Penalty,” also points out the public’s views are often based on inaccurate perceptions.

“In fact, no countries have abolished the death penalty because of popular demand as reflected in opinion polls,” Lehrfreund said. “Political leadership has always been required to do it.”

Lehrfreund is the father of five children aged between 5 and 24. He said they have let him realize one thing: “A generation who is born in the society where the death penalty does not exist have no expectation that death will be imposed as a punishment.”