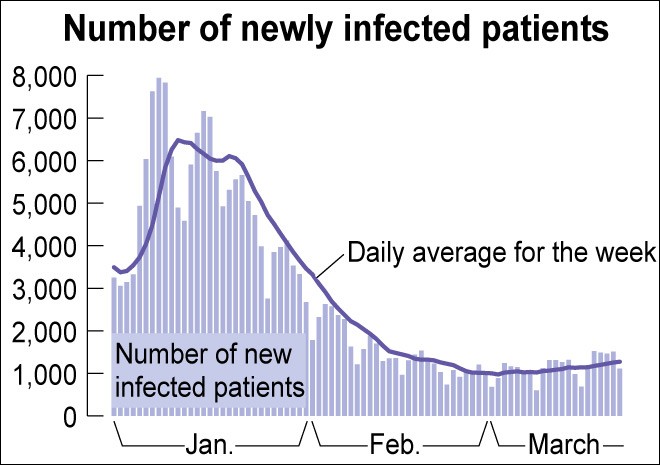 A surge in COVID-19 cases in two northern prefectures has fueled an overall rebound in novel coronavirus infections in Japan, where the central government’s state of emergency no longer exists.

The daily average of newly confirmed infections in Japan for the week through March 2 was 973.3.

But the average has been gradually increasing and reached 1,273 for the week through March 21, when the government lifted the final state of emergency for Tokyo and three surrounding prefectures.

Japan had a record-high daily average of 6,480.9 new cases in the week through Jan. 11, according to a tally compiled by The Asahi Shimbun. Under state of emergency measures, such as shortening business hours of bars and restaurants, the daily average had decreased by about 85 percent by March 2.

However, there are signs around the country that the number has bottomed out and is turning upward again.

The recent worsening situation has even forced Miyagi and Yamagata prefectures to issue their own states of emergency.

The prefecture thought it had the health crisis under control and stopped asking eating and drinking establishments to cut their business hours. It also restarted sales of meal coupons for the Go To Eat government-subsidized program to support bars and restaurants on Feb. 23.

But the number of new COVID-19 patients then jumped at an unprecedented pace, mainly in the prefectural capital of Sendai, and the prefecture was forced to declare a local state of emergency on March 18.

The prefectural government will ask eating and drinking establishments that provide companionship services in all areas of Sendai to close early.

“We have few choices except to ask them to cut their business hours,” Miyagi Governor Yoshihiro Murai said at a news conference on March 22. “If the current situation continues, we might not be able to save lives that can be saved.”

Murai was asked if he will seek the central government’s authority to order bars and restaurants to close early.

“I have to consider that choice as a next step,” he said. “First, I would like to wait and see the effectiveness of the prefectural state of emergency and the shortened business hours for seven to 10 days. If we are still in a tough situation, we will likely ask for help from the central government.”

“The virus might have been brought into the prefecture from Sendai more frequently,” a senior Yamagata prefectural official said. “Lowering the prefecture’s alert levels and the eased caution of residents might have accelerated the virus spread.”

Down south, new virus infections have also sharply increased in Okinawa Prefecture. And Tokyo and the neighboring prefectures of Saitama and Chiba are still struggling to reduce their daily numbers of new COVID-19 patients.

Atsuo Hamada, a professor of travel health at Tokyo Medical University, said that to prevent a resurgence of the virus, “it is necessary to gradually return to the normal conditions of shortened business hours of bars and restaurants and the reduced frequency of going out for meals.”

Yoshihito Niki, a guest professor of infectious diseases at Showa University, called for basic measures, such as expanding the testing capacity and increasing the number of hospital beds for COVID-19 patients.

“We need to be fully prepared to bring the infection situation under control even if the number of patients grows higher than that of the third wave.”

(This article was written by Shinya Tokushima, Hideoki Kozuki and Tomonori Washida.)