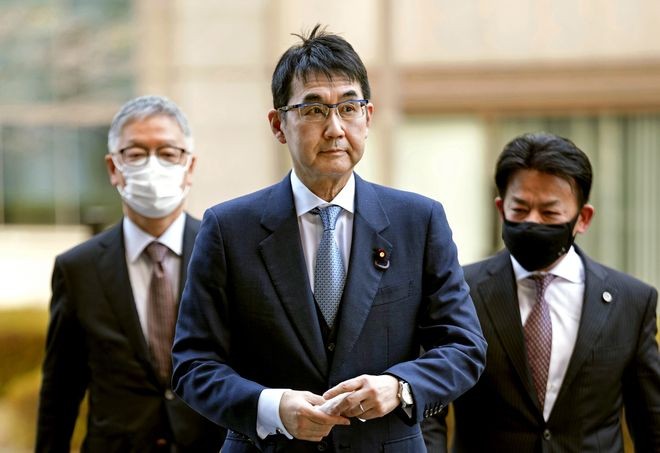 Former Justice Minister Katsuyuki Kawai pleaded guilty to buying votes for his wife in the July 2019 Upper House election and said he will resign from the Lower House.

“I caused great trouble to many people and undermined public trust in elections, which form the basis of democracy,” Kawai said at his trial at the Tokyo District Court on the morning of March 23. “What I can do is to resign from the Lower House. All responsibility lies with me.”

Kawai, 58, was indicted on charges of violating the Public Offices Election Law along with his wife, Anri, 47, who won her first term in that Upper House election, representing a Hiroshima constituency.

He is accused of handing out about 29 million yen ($267,000) in total to 100 people, including Hiroshima prefectural assembly members, local officials and mayors, as well as campaign staff members and supporters.

Kawai on March 23 admitted to most of the allegations, except for distributing cash to campaign staff members to buy votes and conspiring with Anri.

He initially maintained his innocence in court.

“I flatly deny that all the money was intended to buy votes, but I’ll not contest the fact that I’m mostly guilty of the charges,” Kawai said.

He acknowledged to having some intention to help his wife win a Diet seat in the election, but he said he never openly asked recipients of the money to gain votes for her.

Anri lost her Upper House seat on Feb. 5 after her guilty verdict on similar charges was finalized. She received a suspended sentence.

The couple left the ruling Liberal Democratic Party before their arrests.

They are believed to be close to former Prime Minister Shinzo Abe and his successor, Yoshihide Suga, who both traveled to Hiroshima Prefecture to back Anri’s candidacy in the election.