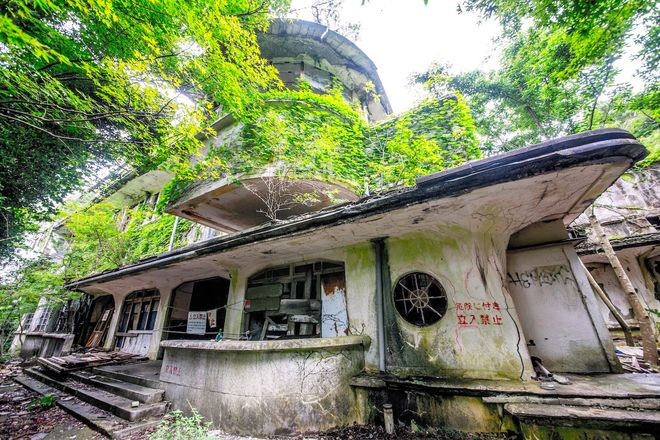 KOBE--The once-glorious Maya Kanko Hotel, abandoned and rotting away on its perch overlooking this city for more than two decades, is getting yet another lease on life.

The Art Deco-style structure, dubbed Japan's "Queen of Ruins," will be designated a tangible cultural property by the government.

The long-shuttered isolated hotel has long been an under-the-radar attraction for tourists looking to visit spots in Japan off the beaten path, according to the Agency for Cultural Affairs and the city government.

The Council for Cultural Affairs on March 19 recommended the hotel and 131 other structures to the culture minister for registration as national tangible cultural assets.

Masahiro Sannomiya, 43, head of Nihon Service, a real estate management company in Minoo, Osaka Prefecture, which owns the building, was greatly relieved by the decision.

"It had been a troublesome 'negative legacy' because we couldn't find a use for it and it would cost a ton of money to demolish," he said.

Volunteers and local residents have been making concerted efforts to preserve and make use of the structure while retaining its ambience. They regularly host tours of the building, which have attracted people from around the country.

The two-story reinforced-concrete hotel with two basement floors was completed in or around 1930 as a recreational facility for a private company. It is said that the hotel was one of the early examples of Art Deco design, which was the rage at the time.

After World War II, it underwent a major refurbishment, adding stained glass windows and other lavish interior details to make a fresh start as a hotel in 1961. But only six years later, it was forced to suspend operations due to landslides triggered by torrential rain.

Beginning around 1974, it was used for training camps. Since its closure in 1993, it has been left to decay, attracting vandals who have broken in, smashed windows and sprayed the site with graffiti.

Tourists out to see something different, however, have elevated the hotel's status, placing it on par with Hashima island off Nagasaki, aka Gunkanjima (Battleship Island), and other popular ruins.

To make use of the hotel as a tourism resource, Nihon Service and volunteers set up an association in 2015 to preserve it. Members of the association, aiming to achieve tangible cultural property status for the hotel, then launched a crowdfunding campaign to raise funds to conduct surveys and prevent degradation.

"It's rare for ruins in Japan to be registered as a tangible cultural property," said Yohei Maehata, 42, head of J-heritage, a nonprofit organization conducting preservation activities for the hotel. "We are relieved for now, but it's only a start for making use of the building."

(This story was written by Hikari Maruyama and Ryo Takeda.)