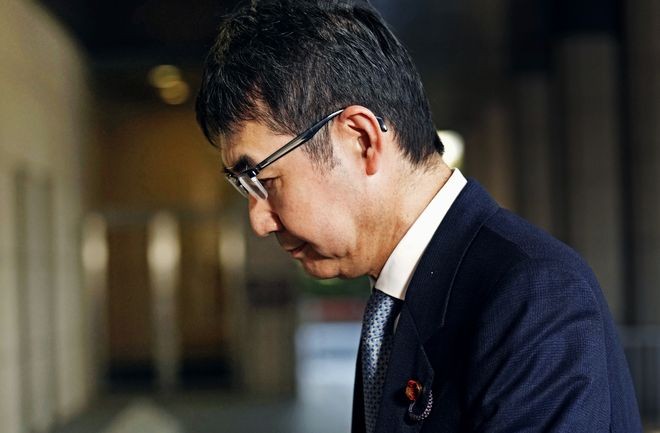 After months of insisting on his innocence, Katsuyuki Kawai, a lawmaker and former justice minister, did an about-face in court on March 23 and pleaded guilty to buying votes for his wife in the July 2019 Upper House election. He also said he will resign from the Lower House to take responsibility.

We presume his action was a last resort maneuver after his chances for an acquittal started fading.

He apologized for “undermining public trust in elections, which form the basis of democracy.”

If he truly meant that, he must live up to his accountability--though belatedly--throughout his trial and tell the whole truth about this vote-buying scandal of an unprecedented magnitude.

Kawai was indicted on charges of violating the Public Offices Election Law by handing out about 29 million yen ($267,000) to 100 local assembly members, local government heads and others to help his wife, Anri Kawai, win the 2019 Upper House election in which she ran from a Hiroshima Prefecture constituency.

While admitting to handing out the cash, Kawai had consistently denied the intention was to buy votes, saying the handouts were meant as congratulatory gifts for successful election campaigns and tokens of encouragement for hardworking campaign staffers.

Anri resigned from the Upper House in February after she was found guilty by the Tokyo District Court.

During a hearing at his trial, Katsuyuki practically testified along the prosecution’s lines of argument, repeating the court testimonies of many of the recipients of his handouts who said they felt they were being bribed.

Perhaps Kawai realized he could no longer keep making up excuses.

But why this turnaround now?

Kawai told the court that he chose the timing after searching his soul in solitary confinement. But we cannot take that at face value.

The campaign for an Upper House by-election will kick off in April to fill the seat vacated by his wife.

If Kawai’s intention is to minimize damage to the LDP in the by-election, the timing of his admission was based on nothing other than cold calculation and political expediency.

The questioning of Kawai in court, which began on March 23, is scheduled to continue until April 9.

Prosecutors need to determine not only how each person was bribed but also where the money came from.

Anri’s campaign received 150 million yen from LDP headquarters, roughly 10 times more than what the party gave an incumbent who ran from the same constituency in the election and lost.

Of that 150 million yen, 120 million yen came from a political party subsidy fund paid for by taxpayers. If Kawai insists none of that money was used for bribery, he must disclose how every single yen was spent.

The LDP’s responsibility is just as heavy for giving the money to Anri’s campaign. But LDP Secretary-General Toshihiro Nikai treated the case as if it no longer has anything to do with the party, noting, “This is an object lesson we’ll take seriously.”

Nikai implied that since Kawai has already left the LDP, whatever he does is none of the party’s business.

The preamble to the LDP’s campaign policy, adopted at the latest party convention, states: “We will always reflect on our political activities with humility to appeal to the Japanese people.”

These words sound quite hollow.

This whole vote-buying scandal took place against the backdrop of the administration of then-Prime Minister Shinzo Abe providing support of an unprecedented nature to Anri’s bid for an Upper House seat in 2019.

Katsuyuki happened to be a close aide to Yoshihide Suga, who was Abe’s chief Cabinet secretary at the time.

Prime Minister Suga is no less involved in this scandal, and he must not be allowed to act otherwise.