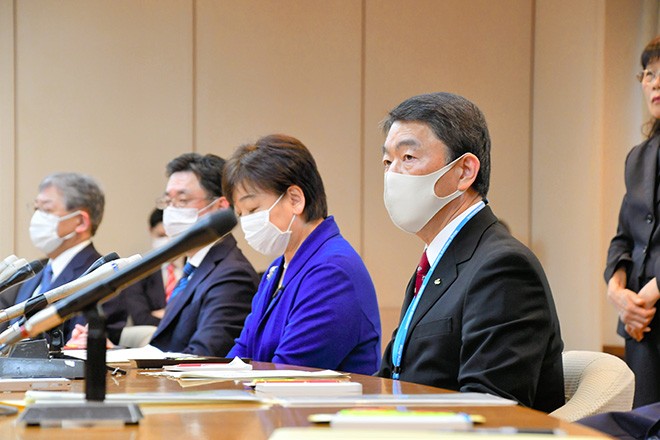 Miyagi Governor Yoshihiro Murai, right, and Sendai Mayor Kazuko Kori, second from the right, announce on March 21 that they will ask eating and drinking establishments that provide companionship services or alcohol to reduce their business hours in Sendai. (Chihito Shin)

Miyagi Prefecture has reached the most serious stage in some indicators concerning the spread of the novel coronavirus, but the central government is reluctant to apply stricter measures to improve the situation there.

One official said the hesitancy stems in part from the vagueness of the requirements to take such steps.

The concentrated measures listed under the revised special measures law to deal with the COVID-19 pandemic can be put in place to prevent the spread of the virus from forcing the government to declare a state of emergency in a given area.

The number of new virus infections has surged in Miyagi, a prefecture in the northern Tohoku region, particularly in the capital of Sendai. The crisis has forced the prefecture to issue a local state of emergency and to renew its anti-virus measures, such as asking drinking establishments to close early from March 25.

Miyagi Governor Yoshihiro Murai said he would see how the prefecture handles the situation before he considers asking the central government for help.

“The first step is to cut business hours,” sources quoted Suga as saying at the meeting. The prime minister also said he would wait and see the effectiveness of the prefecture’s measures.

The central government’s subcommittee on the COVID-19 pandemic has established a four-stage system for six indicators, including the number of new COVID-19 cases and the ratio of available hospital beds, to determine the seriousness of the virus spread in an area. Stage 4 is the most severe, showing an “explosive” growth in infections.

The government has indicated that it would basically apply the concentrated measures, which were introduced in February, to areas in the second most severe stage 3 (surge in infections).

Under the period when the concentrated measures are applied, the central government gives governors the authority to order noncompliant businesses to reduce their operational hours and impose administrative fines against them.

According to Cabinet Secretariat documents, Miyagi Prefecture as of March 21 had reached stage 4 for some of the indicators.

But many of the prime minister’s aides are cautious about applying the special measures in the prefecture.

“The prefecture is still at a level where other measures can be taken,” a senior official said.

The official also said the concentrated measures suddenly emerged as a topic during discussions around December to revise the special measures law, and that more talks are needed to decide on the details, such as procedural steps, before the measures are applied.

“They were not fully discussed before they were introduced,” the official said.

Some officials also noted that strict measures to cut business hours helped to improve the COVID-19 situations in Hokkaido and Hiroshima city.