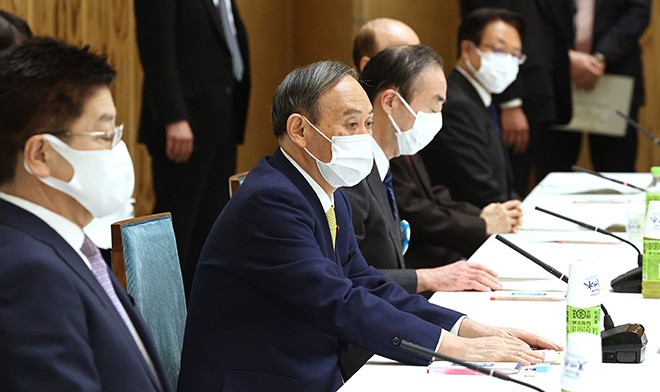 Whether Japan will open the door to having a female emperor by changing its male-only succession process will be addressed by a new panel the government assembled to discuss imperial household issues.

The panel, made up of members much younger than past groups assembled by the government for the purpose, and representing a wider range of views, held its first meeting on March 23.

Prime Minister Yoshihide Suga, addressing the panel members, said, “We are asking you to discuss an extremely important topic that goes to the very foundation of this nation.”

The panel is expected to assemble the main points that have to be considered regarding imperial succession by the end of this year. Atsushi Seike, former president of Keio University, was chosen to chair the six-member group.

While the panel sessions will be held behind closed doors, a summary of the minutes will be released about two weeks after a session without identifying who made the remarks.

The panel is expected to hear from experts on the imperial household and Japanese history on creating an imperial succession system that allows for stable continuance of the imperial system.

The small number of male imperial family members has led to concerns that changes in the imperial succession system were needed.

After the first session, Seike said his panel would refer to the hearings held in 2016 and 2017 by a separate panel that had been set up to consider what should be done after then Emperor Akihito let it be known that he wanted to abdicate in favor of his eldest son, Naruhito, the current emperor.

Those sessions would be referred to in deciding who to call for expert testimony this time around.

While the present order of imperial succession will not be changed, among the topics to be covered include the possibility of having a female emperor and whether to allow a male emperor whose only tie to the imperial family is through his mother.

The panel will also discuss allowing female imperial family members to remain in the household even after marriage to a commoner and whether to let male members of families that left the imperial household in the past set up a new imperial family as long as their fathers had blood ties to past emperors.

Three panel members are in their 40s, making them younger than those selected for the panel that looked into Akihito's abdication. The panel also has gender parity.

“What is important is to bring together members who hold feelings of the average Japanese citizen," a high-ranking official in the prime minister’s office said about the panel selection. "We felt it would be better to have members who did not have preconceived notions about the imperial household structure and imperial succession.”

Another high-ranking official added that the experts to be called to the hearings will also tend “to be younger because what is to be discussed relates to the future of Japan.”

At the first session, members asked that more women be called to provide expert testimony.

There is strong opposition among the more conservative elements within the ruling Liberal Democratic Party to having a female emperor or a male emperor whose only blood tie to the imperial household is through his mother.

An April 2019 survey by The Asahi Shimbun found that about 70 percent of respondents were in favor of such emperors.

But due to the strong feelings within the LDP, the government will likely be very careful in how the panel sessions proceed.

(This article was written by Ayako Nakada and Takashi Narazaki.)