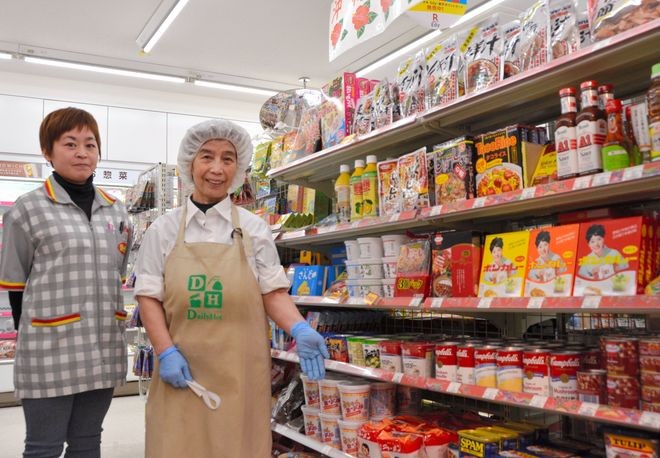 OSAKA--The Daily Yamazaki’s Taisho outlet flies an inviting flag outside its entrance that reads “Okinawan items,” while inside, traditional folk music plays and some of the regulars perform the “kachashi” Okinawan hand dance.

This unassuming corner convenience store has grown over the past quarter-century into a cornerstone of the city’s local Okinawan community. Locals know it as the Daily Okinawa, and it has become a popular destination for former Okinawans living across the Kansai region hankering for a taste of home.

The store is located in Taisho Ward, which is known as "Little Okinawa" because it is home to so many families from Okinawa.

A special section in the shop brims with popular products from the southern island prefecture, including “awamori” liquor, packaged “soki” soup with spareribs and Spam lunch meat, a popular ingredient in Okinawan cuisine. In its meal section, it sells raw Okinawa-style noodles and “jimami” tofu.

The manager, Hatsue Utsunomiya, 73, who was born and raised in Taisho Ward, said she sees Okinawa as her “other hometown,” since it is where her parents grew up and her relatives still reside.

“I hear music performed on the sanshin, an instrument my father loved to play, while surrounded by goods from Okinawa,” Utsunomiya said. “I feel the (store’s) ambience links Osaka with faraway Okinawa.”

Its latest offering amid the coronavirus crisis, which has dealt a brutal blow to sun-kissed Okinawa’s local tourism industry, is a different sort of connection to the southernmost prefecture.

Utsunomiya's daughter, Hiroko Itani, 43, has worked at the store since high school and is responsible for procuring products from the faraway island for the store.

Almost every year she and Utsunomiya go out in search of quality goods at the Okinawa industrial fair, where vendors exhibit prefectural specialties.

In early February this year, Itani received a call from a cousin living in Okinawa who told her that a local souvenir company is “scrambling to deal with its large inventories” due to tourism drying up from the novel coronavirus crisis.

“Send some of them as a test,” Itani replied.

Four hundred "chinsuko" cookies and other souvenirs arrived at the Daily Okinawa, which the store sold for under half the original price.

“Never lose to the coronavirus and support Okinawa by consuming Okinawan food!” read a store message by the goods.

Although Itani was initially worried about whether the products would move, they sold out within a month.

Itani said many customers purchased them because they “cannot travel to Okinawa because of the coronavirus.”

“A lot of people may have wanted to give even just a little help to Okinawa,” she said.

She has already purchased another 200 souvenirs to sell.

Mariko Ishiyama, 77, who lives close by, said she has frequented the store for about two decades, two or three times a week, to pick up ingredients for meals such as Okinawan soba.

“The dish is easy to cook and very tasty,” Ishiyama said. “It is of great help to me that raw noodles are available at a convenience store in my neighborhood.”

The store is located along Taishodori street, which stretches north to south across Taisho Ward, an area home to many families from Okinawa and sometimes called “Little Okinawa.”

Okinawan migrants began moving to the area in the early Taisho Era (1912-1926), according to a memorial booklet made by the association of Osaka Prefecture’s Okinawan diaspora.

The prefecture was suffering at the time from a sharp drop in sugar prices caused by a recession that struck immediately after World War I. It devastated Okinawa’s core sugar manufacturing business, and that led many to leave the island in search of new jobs.

Taisho Ward and other areas that had developed as industrial zones lured many Okinawans into the lumber and steel businesses. They initially mainly resided in the Kita-Okajima district in Taisho Ward.

People often say that one of every four ward residents are Okinawans or relatives of Okinawa natives, but a ward representative noted the actual number is “unknown because no surveys have been carried out on emigrants from Okinawa.”

But specialty Okinawan goods were not always readily available in the area.

Utsunomiya has Okinawan parents and was born and raised in the ward. An acquaintance of her husband, Kiyoharu, 73, ran the store until the couple took it over in 1995.

She approached the operator of the Daily Yamazaki chain about the strong local demand for these sorts of items. Although reluctant at first, the operator gave Utsunomiya the OK to offer the special items after learning more about local trends in the ward, she said.

But few Okinawa-style products existed for convenience stores, so she had to track down all the items on her own.

The first Okinawan products put on sale were sweets, including chinsuko and black sugar cake.

They proved popular, and were quickly followed by handmade Spam pork and egg onigiri. The shop sold nearly 100 rice balls a day.

The store gradually introduced more products until they had a wide range to offer.

It soon drew in more shoppers from both around the neighborhood and from outside Osaka, including places such as Amagasaki, Hyogo Prefecture, as word trickled out.

That same success has carried on since then.

“Every day, I see firsthand how locals support us,” said Utsunomiya.