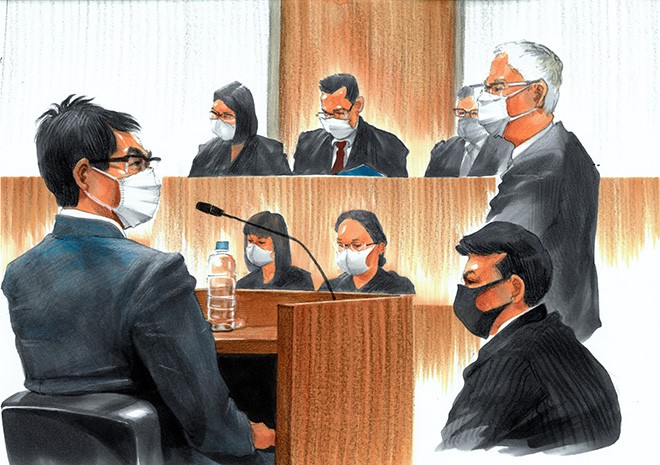 Former Justice Minister Katsuyuki Kawai’s guilty plea to vote-buying charges and resignation from the Diet appeared abrupt, but his move came at the “right timing” for the ruling Liberal Democratic Party.

After long claiming he was innocent, Kawai, 58, admitted at the Tokyo District Court on March 23 to most of the allegations concerning payments to local politicians to help his wife, Anri, win her first Diet seat in the July 2019 Upper House election.

Prosecutors had developed a strong case against him, given the stream of witnesses who testified that they felt they were being bribed when they received money from the defendant.

In addition, Anri, 47, was found guilty on similar charges in January at the same court. She received a suspended sentence and lost her Upper House seat.

Senior LDP officials were paying close attention to Kawai’s trial, not necessarily about the verdict but on if and when he would express his intention to step down from the Lower House.

Although the Kawais had both left the LDP before their arrests in June 2020, the scandal still stained the party. They are believed to be close to Prime Minister Yoshihide Suga and his predecessor, Shinzo Abe, who both traveled to Hiroshima Prefecture to back Anri’s candidacy in the election.

An Upper House by-election for Anri’s constituency in Hiroshima Prefecture will be held on April 25.

Under the law, no by-election will be held to fill any seats vacated by Lower House members on March 16 or later before the current lawmakers’ terms expire on Oct. 21.

Kawai announced his resignation on March 23, allowing the LDP to avert a situation of dealing with same-day by-elections called because of the shenanigans of its former members.

In addition, if Kawai had continued to fight the charges and remain in the Diet, the LDP may have faced difficulties gaining support for its candidate in the Upper House by-election. The party had hoped Kawai would resign before April 8, when official campaigning for the Upper House by-election will kick off, to minimize the impact of the scandal.

One senior LDP official expressed relief after Kawai pleaded guilty and expressed his intention to vacate his Lower House seat.

“It was the right timing,” the official said.

Kawai was indicted on charges of violating the Public Offices Election Law. He is accused of distributing about 29 million yen ($267,000) to 100 people, including Hiroshima prefectural assembly members, local officials and mayors, to help Anri gain votes in the 2019 election.

At the first hearing in his trial in August last year, he denied the charges, insisting that he gave the money to prefectural assembly members as gifts to congratulate them for winning elections.

But on March 23, he admitted that most of the money was intended to buy votes for his wife.

Kawai did not give a specific number of people he gave money to, but he reportedly said he provided roughly 23 million yen to around 90 people for vote-buying purposes.

He also said of his sudden change of mind, “I kept asking myself in the jail cell what to do and concluded that I should take responsibility by pleading guilty to the charges for the sake of my supporters.”

It was clear, however, that the trial was not going in his favor.

Ninety-four of the 100 cash recipients, including prefectural assembly members and mayors, acknowledged over 46 hearings held so far that the payments were made to buy votes for Anri and that they were aware that the actions were illegal.

“He forcibly handed me money, so I had no choice but to accept it,” one witness testified in court.

“I couldn’t decline (the cash) because he’s a Diet member,” said another.

Kawai acknowledged his intention to help his wife win a Diet seat, and he did not dispute allegations that he oversaw her election campaign, saying it is unavoidable that he is viewed as doing that.

However, he denied that he distributed money to some of the campaign staff members and prefectural assembly members to buy votes. He also denied conspiring with Anri.

Kawai was elected to the Lower House seven times. He became justice minister in September 2019 but stepped down from the post the following month after a weekly magazine reported campaign irregularities involving his wife.

Although prosecutors will continue to question Kawai at the trial, the LDP, for now, seems satisfied concerning upcoming by-elections.

“I undermined public trust in elections, which form the basis of democracy,” Kawai said on March 23. “All responsibility lies with me.”