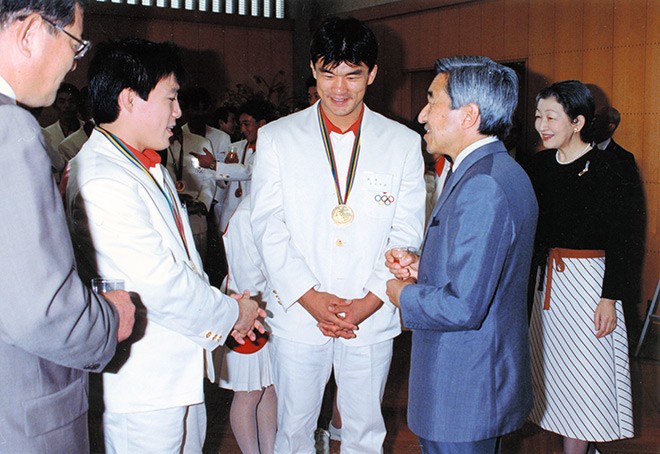 Toshihiko Koga, second from left, and Hidehiko Yoshida, third from left, speak with the then emperor and empress after the Barcelona Olympics in September 1992. (Pool)

Hidehiko Yoshida, 51, who was a member of the national team at the 1992 Barcelona Olympics with Koga, said in a prepared statement, “I am in shock, and I just cannot believe it.”

Yoshida had a close relationship with Koga since they were teenagers.

“I believed in a miracle until the last minute, but it did not happen,” Yoshida said about Koga’s battle with cancer.

Yoshida and Koga, two years apart in age, together devoted themselves in the sport at the prestigious Kodo Gakusha judo school in Tokyo.

Yoshida entered the school when he was a third-year junior high student.

“I was not good at judo but Koga 'senpai' selected me to be his assistant,” Yoshida said.

Under his wing, Yoshida said he “became stronger both technically and mentally.”

Yoshida won the gold medal in the 78-kg class at the Barcelona Games, while Koga did so in the 71-kg class.

Yoshida described the gold medal he won in Barcelona was “won by the two of us” and “a treasure of my life.”

Judo great Ryoko Tani, 45, won medals in the women’s 48-kg class at five Olympics. At two of the five Games--Barcelona and Atlanta, Koga was on the national team, too.

“I have too many memories (of him) to count,” she said.

“He always treated me kindly, calling me, ‘Ryoko, Ryoko.’ I will never forget that,” she said.

Koga’s death has also hit those who grew up idolizing the icon hard.

Keiji Suzuki, 40, who won a gold medal in the 100-kg class at the 2004 Athens Olympics, said he was an elementary school sixth-grader when he watched the injured Koga’s gutsy victory in Barcelona.

“It was so very cool to me back then, and Koga has been my idol,” he said.

Yasuhiro Yamashita, a renowned judoka who won a gold medal at the 1984 Los Angeles Olympics, said in a prepared statement, “I will never forget the way lightweight Koga fought openly and squarely against heavyweight judoka.”

Yamashita, chairman of the Japanese Olympic Committee and head of the All Japan Judo Federation, praised Koga as an “athlete who stood out in every aspect--with good spirit, technique and physical condition for a fight.”

“But most of all, he was an athlete with a giant heart,” he said.