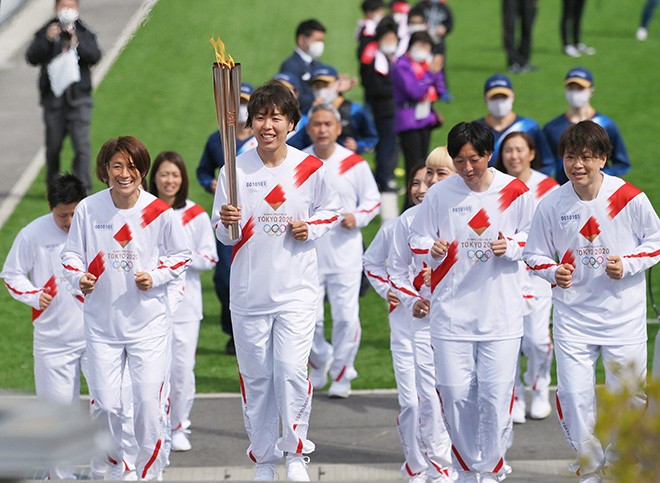 The Olympic torch relay for the Tokyo Games finally started, following a closed-door ceremony that reflected precautions against a health crisis that continues to plague the planet.

The torch left J-Village, located in Naraha and Hirono towns in Fukushima Prefecture, on the morning of March 25. After a 121-day journey around the nation, the flame is expected to light the Olympic cauldron in Tokyo in July.

“The Olympic flame has been kept lit quietly and strongly, while the entire world has been in a tough situation in the past year,” Seiko Hashimoto, chief of the Tokyo Olympic organizing committee, said at the kick-off ceremony. “I hope this flame will turn a light of hope in each and every corner of Japan, and become a band of light to connect a path of hope.”

Mikio Date and Takeshi Tomizawa, members of Sandwichman, a comedy duo from Sendai, delivered the flame by a lantern and transferred the fire to an Olympic torch plate.

Azusa Iwashimizu, 34, a female soccer star from Iwate Prefecture, lit a torch and started running with 14 other members of the 2011 women's World Cup team, Nadeshiko Japan.

The ceremony was held behind closed doors at an indoor facility at the village to lower the risk of novel coronavirus infections. A limited number of officials and local children attended.

Before the COVID-19 pandemic forced organizers to postpone the 2020 Games to summer this year, around 3,000 members of the general public were scheduled to be invited to the ceremony.

The flame arrived in Japan from Greece in March 2020. It has been on display in 14 prefectures, including Hokkaido, since the Summer Games were postponed.

Olympic organizers have promoted the Tokyo Olympics as a symbol of reconstruction of the Tohoku region, which was devastated by the 2011 Great East Japan Earthquake, tsunami and nuclear disaster.

The torch will be carried through 859 municipalities around the country. About 10,000 runners are expected to participate.