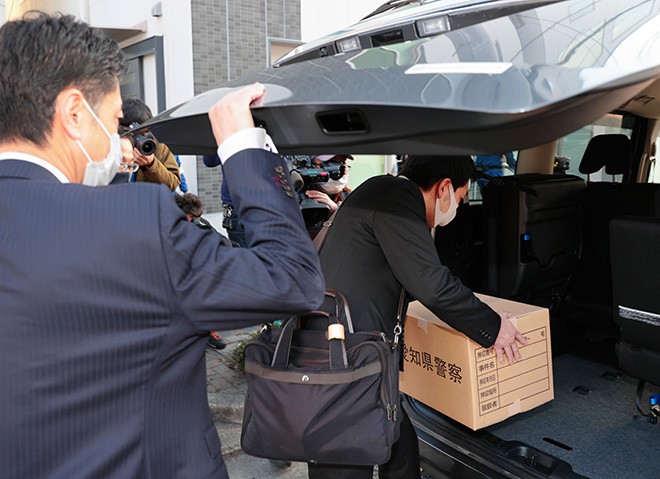 NAGOYA--Aichi prefectural police searched the former office of a political campaign to oust the governor for evidence related to the massive number of forged signatures discovered in its recall petition drive.

The office, which has gone unused over the past two months, served as the secretariat for the movement to recall Aichi Governor Hideaki Omura.

The Aichi prefectural election administration commission determined that about 83 percent of some 435,000 signatures submitted through petitions are forgeries. It filed a criminal complaint with Aichi prefectural police on Feb. 15.

Officers had previously gathered the recall petitions from local ward government offices and searched the former office of the secretariat on March 24, police said.

They are looking into possible violations of the Local Autonomy Law, which prohibits forging names on a petition. Anyone found guilty faces a maximum punishment of three years in prison or a fine of up to 500,000 yen ($4,700).

The recall campaign was started by Katsuya Takasu, a cosmetic surgeon well known for denying the Holocaust and the Nanking Massacre, along with others upset at how Omura handled the Aichi Triennale 2019 international art festival.

Controversy surrounded the Aichi Triennale even before it opened on Aug. 1, 2019.

Its “After ‘Freedom of Expression?’” exhibit featured a sculpture symbolizing "comfort women" forced to provide sex to Japanese military personnel before and during World War II.

It also included a video presentation that showed scenes of burning portraits, including one of Emperor Showa, the posthumous name of Emperor Hirohito, who reigned from 1926 until 1989.

Protests and threats of terrorist acts prompted officials to suspend the exhibit after just three days.

Takasu met with reporters on March 24 and said the office searched by police was closed in late January.

It is located close to an office used by Kawamura.

Takasu seemed puzzled by the search, but said he would cooperate fully with police.

Takahiro Tanaka, a former Aichi prefectural assembly member who headed the recall campaign secretariat, issued a statement that said he would respond to any requests from investigators.