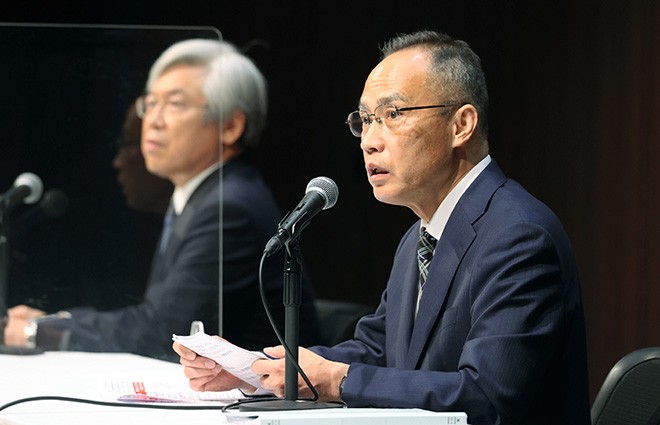 Officials of the Japan Post group on March 24 announced disciplinary action against about 1,300 staff members, bringing the total number of those penalized in the scandal to about 3,300.

Of the total disciplined, 2,260 were post office workers, including 26 who were fired.

The officials said the announcement was likely the last concerning the matter, clearing the way for postal workers to begin efforts to sign up new insurance policyholders from April 1.

“We have reached the final stage of the investigation and disciplinary measures, and there are no major issues remaining that would prevent us from moving to the next stage,” Japan Post Co. President Kazuhide Kinugawa said at the March 24 news conference.

But Tetsuya Senda, Japan Post Insurance president, said the sales quotas that had been imposed on workers would not be resurrected.

A 2019 investigative report by The Asahi Shimbun found that post office workers engaged in questionable sales practices of insurance policies because they were under enormous pressure from their superiors to fulfill their sales quotas. The interests of the customers took a back seat to the sales figures.

The post office workers who were fired were found to have been directly involved in such practices. One of the many dodgy tactics used was to encourage policy holders, mainly elderly people, to switch to new policies that would not provide greater benefits but would only improve the sales agent’s record.

About 1,000 higher ranking officials were given comparatively light disciplinary measures on the grounds they were not aware of what was going on, according to Japan Post.

Disciplinary action was taken against 686 superiors at the post offices, and all of them kept their jobs. They did not adequately grasp the situation among the post office workers and failed to thoroughly instruct their subordinates about how to act, Japan Post officials said.

About 50 superiors who used their positions to harass subordinates who fell behind on their sales quotas received suspensions and pay cuts.

Only two superiors were found to have willfully ignored the dodgy sales tactics or given advice on how to perpetuate such shady transactions.

That goes against the report compiled by a special investigative committee, which found many instances of superiors ignoring or encouraging the dodgy sales practices.

The report also found that instructors taught the questionable tactics to the sales agents, but not a single instructor was disciplined for such actions.

Japan Post officials said 396 executives and employees at the head office and main branches of Japan Post and Japan Post Insurance were disciplined. Included in that list were the presidents of the two companies.

Japan Post workers had refrained from going door-to-door to sign up new policyholders since July 2019 after The Asahi Shimbun reported on the thousands of instances of questionable sales practices.