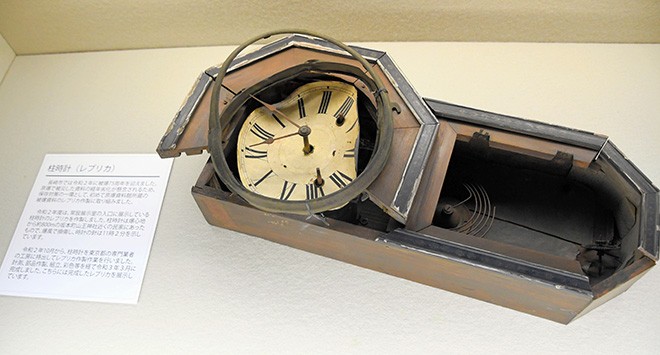 NAGASAKI--A badly damaged wall clock that stopped at 11:02 a.m.--the moment the atomic bomb exploded over Nagasaki on Aug. 9, 1945--has suffered from the ravages of time at a museum here.

Nagasaki city has stepped in to create a replica, which went on display at the Nagasaki Atomic Bomb Museum on March 24.

“It is a replica, but it has a powerful impact,” said Masao Tomonaga, 77, a hibakusha, who saw the replica. “It is meaningful because many people can see it.”

Among the atomic bomb-related materials possessed by the museum, the clock became the first to have a replica.

The original wall clock hung in a private residence, about 800 meters from the epicenter of the atomic bombing.

The late Chuhachi Kubo, the original owner, donated it to Nagasaki in 1949. It is 52 centimeters in height, 27 cm in width and 20 cm in depth.

The original has been displayed at the entrance of the display room at the museum from five years ago as a testament to the destructiveness of the atomic bomb.

However, the clock's condition has been deteriorating due to the lighting and humidity in the museum.

Nagasaki city had been making the replica since last October at a cost of about 3.3 million yen ($30,000), which is being subsidized by the central government.

The city copied the damages on the wall clock inflicted by the atomic bomb blast and completed the replica in March.

Nagasaki is planning to loan the copy to people and groups outside Nagasaki or use it for educational purposes to promote peace.