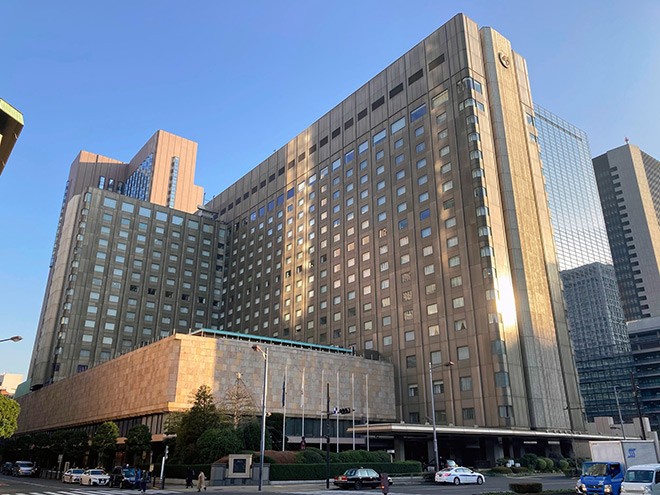 The Imperial Hotel Tokyo will be rebuilt, with construction starting in fiscal 2024. The photo was taken in Tokyo's Chiyoda Ward in February. (Asahi Shimbun file photo)

The Imperial Hotel Tokyo is getting a major facelift in preparation for fierce competition its owner expects from foreign-affiliated luxury hotels in Japan after the COVID-19 pandemic is contained.

Imperial Hotel Ltd., which owns the hotel, announced March 25 that it will spend more than 200 billion yen ($1.83 billion) to 250 billion yen to rebuild the storied establishment.

The hotel's third-generation main building currently in use was built half a century ago. Work to rebuild it will begin in fiscal 2031 and be completed in fiscal 2036.

Hotel services will continue to be provided at both buildings until reconstruction work begins at each one.

Mitsui Fudosan Co., which is leading redevelopment in nearby areas, will obtain a part of the land the hotel's tower building is on and operate it jointly with Imperial Hotel.

Numerous details of the new facilities have yet to be decided, including the height of the buildings and the number of rooms.

Imperial Hotel, however, said it aims to pass the culture and atmosphere of the current hotel on to its successor so that it becomes a “hotel able to serve as Japan’s guesthouse.”

The first-generation building of Imperial Hotel Tokyo went up in 1890, becoming greatly popular along with other big hotels, including the Hotel New Otani and Hotel Okura.

Guestroom occupancy sank last year, however, due to the pandemic and in February the hotel announced it would offer long-term stay plans for guests with a lower monthly charge.

Imperial Hotel as a whole expects a 14.8 billion net loss for the business year ending March 2021. It posted a profit of 2.4 billion yen the previous business year.