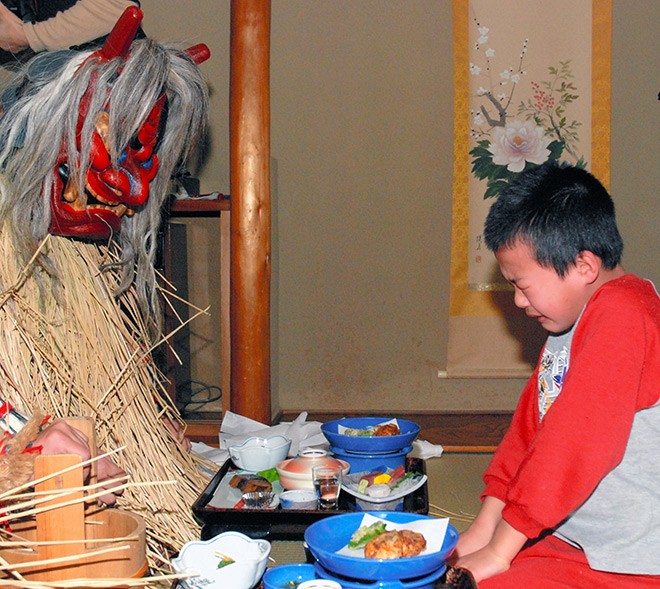 A boy sitting on his heels pledges to behave after being scolded by a Namahage demon in Ogashi, Akita Prefecture. Namahage demons discipline children whose parents struggle to do so themselves. (Asahi Shimbun file photo)

More than 40 percent of Japanese adults believe that corporal punishment, including hitting, slapping and kicking, can be used to discipline children, a survey by Save the Children Japan showed.

The results of the nationwide online survey conducted in January were released to mark one year since the revised Child Welfare Law, which bans parents and others from using corporal punishment on children, took effect in April last year.

The total figure dropped by nearly 20 percent from 56.7 percent in the previous survey conducted in 2017, which received 20,000 responses.

Save the Children Japan said the percentage of people who condone physical punishment remains high. The organization called for more effective measures to increase public awareness that corporal punishment can have a serious negative impact on children’s growth.

The survey asked those who no longer think corporal punishment is acceptable about why they changed their opinion. They could choose multiple answers.

According to the results, 56.1 percent of them said they learned about the negative impact of corporal punishment and other similar forms of discipline on children.

A separate survey by the organization covering 1,000 people with children aged 18 or younger found that 29.2 percent had spanked their children in the past three months.

Some of the respondents said they faced daily difficulties in raising their children, such as balancing child-rearing, household chores and work as well as feeling lonely.

The survey showed that parents experiencing such problems were more likely to spank their children as punishment.

“More support measures are needed to prevent families struggling with child-rearing from being driven into a corner,” said Yoko Ono, a team leader in the domestic business division of Save the Children Japan.