Emperor and empress pray for pandemic to end quickly in poems 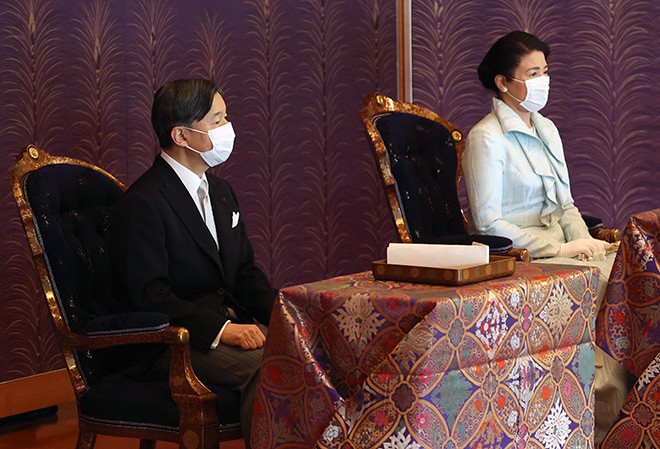 Emperor Naruhito and Empress Masako listen to poems being read out at the New Year Poetry Reading ceremony on March 26. (Pool)

This year’s New Year Poetry Reading at the Imperial Palace in Tokyo, like so many events, reflected the sign of the times during the novel coronavirus pandemic.

Most of the people reading out poems did so while wearing face masks or plastic shields and the audience was restricted to just three other participants in the Matsu-no-Ma state room. About 100 are in attendance in normal years.

The ceremony is normally held in mid-January but was pushed back until March 26 because of the pandemic and infection prevention measures were in place in the state room where it was held.

The poems composed by Emperor Naruhito and Empress Masako contained their prayers for bringing the public health crisis under control.

The theme of this year’s ceremony was “mi,” or fruit.

Naruhito’s poem read: “Hitobitono/ Negai to Doryoku ga/ Mi wo Musubi/ Tairakeki Yo no/ Itaru wo Inoru” (I sincerely pray that/ The hope and efforts of the people/ Bear beautiful fruit/ Leading us to peaceful days).

Traditional “waka” poems written by imperial family members and 10 other composers selected from the public are read out loud.

But this year not all the people whose poems were selected could come to Tokyo for the ceremony so they participated online. A total of 13,657 poems were submitted by members of the public in Japan and abroad.

Masako’s poem reflected the seasonal changes that still occur even though the pandemic may have radically altered the daily lives of people.

Her poem read: “Kansen no/ Osamariyukuwo/ Hitanegai/ Idetatsu Sono ni/ Ume no Mi Aoshi” (As I stand in the garden/ Yearning for/ The end of the infection’s spread/ The fruit of the ume/ Are a hopeful green).

The Imperial Household Agency also announced that the theme for next year’s poetry reading will be “mado,” or window.