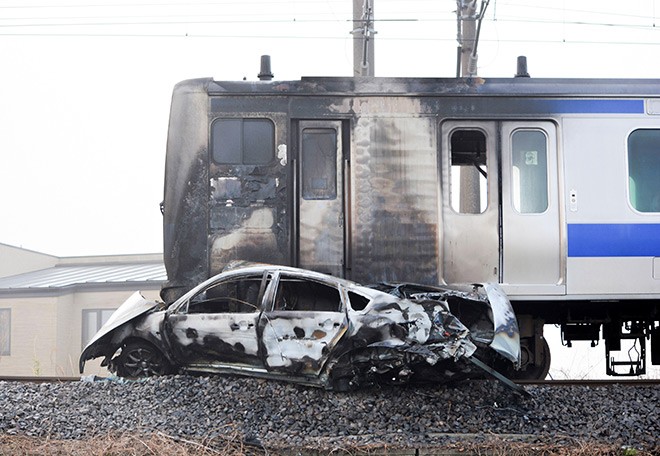 The burnt front car of the Joban Line train that collided with a car being chased by police near Tsuchiura Station in Tsuchiura, Ibaraki Prefecture (Tetsuo Taniguchi)

TSUCHIURA, Ibaraki Prefecture--A Joban Line train struck a car being chased by police early on March 26 in a fiery crash here, derailing the train and partially disrupting service along the line for most of the day.

Ibaraki prefectural police are searching for the driver of the car, who was not found amid the ruins of the vehicle. None of the 64 train crew and passengers were injured.

According to prefectural police, the collision occurred around 12:08 a.m. about three kilometers north of Tsuchiura Station.

Both the car and the front car of the derailed Joban Line train were engulfed in flames. The fire was extinguished in about an hour.

According to officers with the Tsuchiura Police Station, a police car was  pursuing the vehicle because the driver did not have the headlights on.

But police lost sight of the car about 500 meters north of where the collision occurred. Police believe the vehicle entered the tracks by ramming through a fence.

According to officials with the Mito branch of East Japan Railway Co., service between Tsuchiura and Hatori stations of the Joban Line was suspended for much of March 26 and the company has no idea when it may resume.

The limited express Hitachi and Tokiwa train service has also been suspended.

(This article was written by Hiroyuki Kojima and Tetsuo Taniguchi.)