Nissan-Renault rift at center of Japanese trial of American 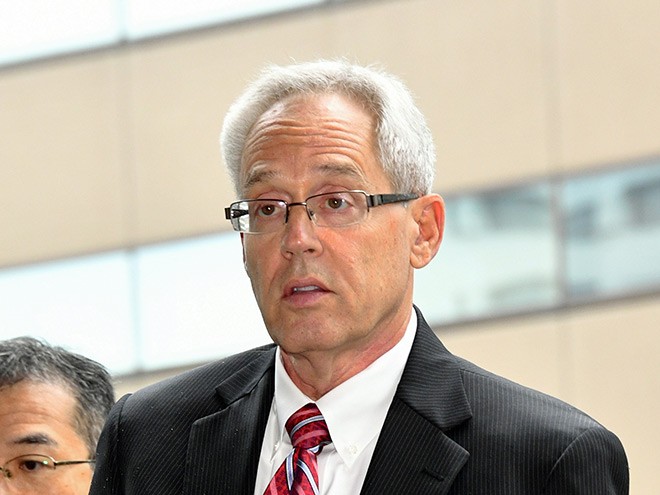 The trial of former Nissan executive Greg Kelly in a Tokyo court is increasingly focusing on a rift between Nissan Motor Co. and its French alliance partner.

Kelly, an American, was arrested with former Nissan chief Carlos Ghosn in November 2018 and has been charged with under-reporting Ghosn’s compensation. He says he is innocent and was merely trying to find legal ways to pay Ghosn, who was dispatched by Renault to help turn Nissan around in the late 1990s.

Kelly’s chief defense lawyer Yoichi Kitamura questioned Hiroki Kobayashi, a partner at Latham & Watkins, Friday in the Tokyo District Court about an investigation of Ghosn and on Nissan’s relations with Renault SA of France that the international law firm conducted on Nissan's behalf.

Kobayashi declined to answer many questions, citing attorney-client privilege. But he confirmed that the law firm had investigated the relationship between the two alliance partners.

In testimony earlier this month, Hitoshi Kawaguchi, formerly in charge of communications at Nissan Motor Co., said he feared that Ghosn planned to try to integrate Nissan and Renault to make the relationship “irreversible.”

Kawaguchi feared Ghosn would set up a holding company, and Nissan and Renault would remain separate in name only, losing their identities. He also sought help from Prime Minister Yoshihide Suga, who at the time was the chief government spokesman. Suga apparently took little action.

Former Nissan executive turned whistleblower Hari Nada and former Nissan auditor Hidetoshi Imazu described in their testimonies how they had gone to the prosecutors without consulting the company's board. That led to the arrests of Ghosn and Kelly.

The final report of the internal investigation by Latham & Watkins was presented to Nissan in 2019, then headed by Chief Executive Hiroto Saikawa. As a result, Nissan, in cooperation with Renault, changed the governance structure at Nissan to allow for more external monitoring.

Nissan does not comment on specifics of the ongoing trial.

Ghosn has accused other top Nissan executives of engaging in a “conspiracy” to force him out. While out on bail in December 2019, Ghosn, who faces additional breach of trust charges for allegedly using Nissan money for personal gain, fled to Lebanon. Japan has no extradition treaty with Lebanon.

Ghosn had halved his salary over several years, slashing it by 1 billion yen ($10 million) a year, after the disclosure of high executive pay became required in 2010. The focus of Kelly's trial is whether that difference had been decided on and should have been reported.

Earlier this year, Ghosn said French investigators had visited Lebanon to question him about probes in France into transactions between Renault and an Oman distributor; payments by a Renault-Nissan holding company in Amsterdam and a party Ghosn held at Versailles. Ghosn suggested that Japanese investigators do the same.

Tokyo prosecutors have repeatedly said they have a case against both Kelly and Ghosn, who is a Lebanese, French and Brazilian national. They have not confirmed if they have gone to Lebanon, but have said they are pursuing Ghosn through various channels.

Kelly’s trial opened in September and a verdict is not expected for months. More than 99 percent of Japan’s criminal trials result in convictions.

Nissan as a corporate entity is a defendant in the same trial, but has acknowledged guilt, objecting only to questioning by Kelly’s defense team.

Separately, two Americans, Michael Taylor and his son Peter Taylor were extradited from a Boston area jail and charged Monday with helping a criminal escape. Their trial date has not been decided.