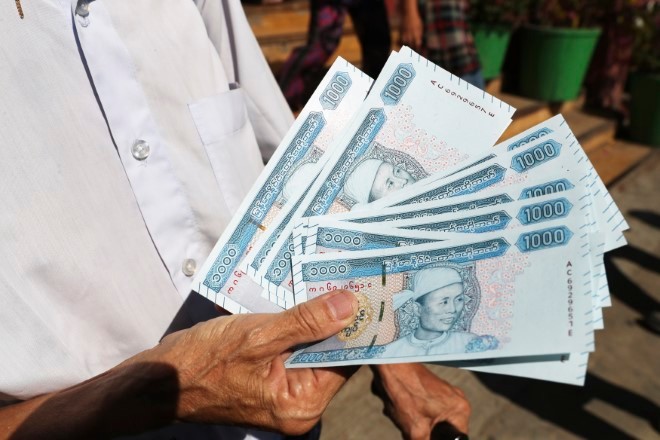 In this Jan. 7, 2020, file photo, a man shows new currency notes outside a bank in Yangon, Myanmar. (AP Photo)

Human rights advocates applauded the decisions to target those companies and cut them off from dealings with banks and businesses in the United States and United Kingdom. Critics of the military’s Feb. 1 coup, its jailing of Aung San Suu Kyi and other civilian leaders, and its killings and imprisonment of thousands of mostly peaceful protesters say more needs to be done to pressure army leaders.

They are still urging governments to take action against another powerful empire, the Myanmar Oil & Gas Enterprise, which does business with major foreign oil companies.

WHAT ARE THE COMPANIES INCLUDED IN THESE SANCTIONS?

A human rights fact-finding mission found that Myanmar Economic Holdings Ltd. (sometimes spelled Myanma) and Myanmar Economic Corp. own or control more than 100 subsidiaries in many industries. Another 27 businesses are affiliated with one or both of the conglomerates. It includes everything from rubber plantations and dairy farms to gem miners, telecoms, construction, manufacturing, insurance and real estate companies. Revenues from many of those businesses help to support the military. Foreign companies renting offices in buildings controlled or owned by MEC and MEHL or operating factories in the industrial zones they control will have to find a way to ensure they are not providing funds to the army.

WHAT ARE THE SANCTIONS?

The United Kingdom announced it would sanction MEHL. The U.S. Treasury sanctions prohibit business and other dealings or trade with people and companies on its lists unless they have exemptions or special authorization. They could bar banks from even using U.S. dollars--the globe’s leading currency--in transactions with the two military holding companies. The sanctions exempt dealings needed to conduct U.S. government business or to provide humanitarian aid and promote democracy. U.S.-held assets of people and companies included in the list of “Specially Designated Nationals” also are frozen or blocked. The U.S., Canadian and UK governments earlier included in sanctions lists top military leaders and members of their immediate families and some other army officials and units believed responsible for violent crackdowns against people demonstrating against the coup.

WHAT IS THE LIKELY IMPACT?

It’s unclear just how big the impact of the sanctions will be on the military’s cash flows since Myanmar’s Asian neighbors--its biggest investors and trading partners--have shied away from imposing their own restrictions on doing business with the junta. Still, human-rights groups applauded the new sanctions. They will have a wider reach than earlier measures taken against Myanmar’s coup leaders, who do little direct business with U.S. banks or other U.S. businesses. U.S. and UK companies doing business with the companies will need more extensive due diligence to avoid violating the sanctions.

Rights activists are urging the European Union and governments in Asia to join in the effort to put pressure on the military to respect results of a 2020 election and free Aung San Suu Kyi and other civilian leaders. Outright United Nations sanctions would be unlikely to win support from Security Council members China and Russia. Myanmar’s neighbors in Southeast Asia, Japan and South Korea tend not to support using sanctions. Another idea that has been raised is for companies doing business with state-owned Myanmar Oil & Gas Enterprise to withhold royalty payments until the political crisis is resolved. Its foreign partners include Total SA of France, Chevron Corp. and PTT Public Co. Ltd. of Thailand.

So far, the actions taken to put pressure on the military leadership are not blanket trade sanctions that would cause widespread hardship for most people in Myanmar. Experts and activists have urged that the measures be targeted at the military and its leaders who staged the coup and have suppressed the public backlash against it. In the meantime, many people within Myanmar have gone on strike, hindering banking, trains and other business operations to try to exert economic pressure from inside the country.