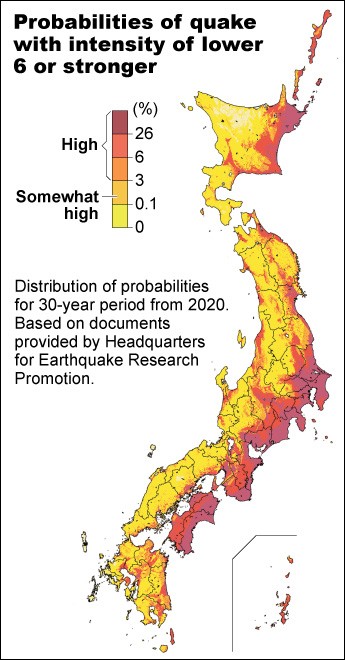 The likelihood of a powerful earthquake striking over the next 30 years remains high along Pacific coastal areas of Japan in light of a spate of recent aftershocks triggered by the magnitude-9.0 Great East Japan Earthquake of 2011, scientists say.

For Tokyo, the possibility was put at 47 percent.

The findings came in a report released March 26 by the government’s Headquarters for Earthquake Research Promotion.

It found that the northeastern Tohoku region remains particularly vulnerable to quakes with intensities of lower 6 or stronger on the Japanese seismic scale of 7.

Until now, aftershocks were not taken into consideration when calculating probabilities simply because doing so for a 30-year span would inevitably lead to higher risk ratios.

But continuing aftershocks from the massive earthquake that struck on March 11, 2011, and left nearly 20,000 people dead in the tsunami it generated caused researchers to change tack.

The probability maps are based on the projected chances of a big earthquake hitting as well as how much shaking such a temblor would entail.

The probabilities are for a 30-year period starting from Jan. 1, 2020, and areas with a probability of 3 percent or higher are considered to have a “high” probability of a quake of lower 6 or stronger in intensity.

Probabilities for some locations along the Pacific coast increased by about 10 percentage points.

For major urban centers located in the plains where the ground is softer, the shaking would be more intense and the probability of a big quake striking was considered high in general.

Aside from the 47-percent probability of Tokyo being hit by a major quake, Nagoya was given a 46-percent rating and Osaka a 30-percent one.

Naoshi Hirata, who heads the Earthquake Research Committee within the headquarters, emphasized that nowhere in Japan is free of the risk of a strong quake.

“Residents should not let down their guard just because the probability for their area is low,” Hirata said at a March 26 news conference. “There is always the possibility of a strong quake striking anywhere.”

He urged the public to remain vigilant by securing furniture to prevent it toppling over in an earthquake while doing what they must to ensure homes can withstand a strong quake.