‘Hanko’ personal seal use survives despite effort to stamp it out 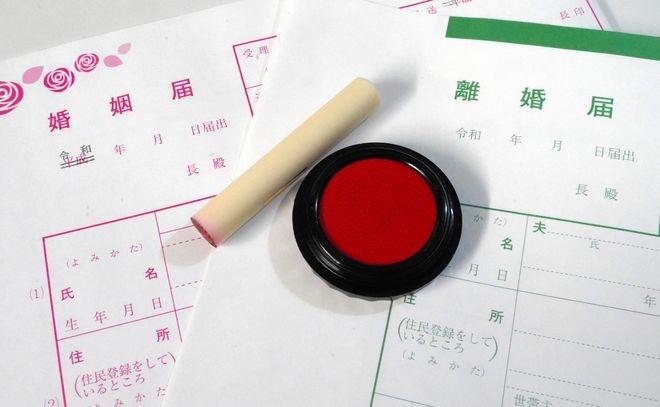 “Hanko” personal seals will no longer be required on marriage and divorce notification forms but are likely to be kept as an option. (Toshiki Horigome)

The central government has resigned itself to realizing that its effort to pry "hanko" out of the public's hands is unlikely to succeed anytime soon.

So, it has decided to keep allowing the use of the personal seals, though they'll no longer be mandatory.

The space on marriage, divorce and other forms to be submitted to authorities for people to stamp their hanko will likely stay. The compromise comes despite the government's push to eliminate requirements for hanko from administrative formalities.

Justice Ministry officials told The Asahi Shimbun the decision was made to “take into account the diverse opinions of the public.”

Hanko manufacturers entreated the so-called “hanko lawmakers’ league,” made up of concerned Diet members from the ruling Liberal Democratic Party, to campaign to keep mandatory requirements to use seals on documents.

Many citizens feel strongly that hanko should continue to be required on marriage and divorce notification forms, which mark milestone life events.

Some say they want to stamp their marriage notification forms with personal seals to make them keepsakes.

The Justice Ministry plans to end the mandatory requirement for hanko in procedures associated with family registers but will permit people to use them to stamp related documents if they wish.

Many members of the public are calling for continued hanko requirements on marriage and divorce notification forms, Shinichi Nakatani, secretary-general of the hanko lawmakers’ league, argued during a subcommittee session of the Lower House Budget Committee on Feb. 26.

“Seals have been required on important documents as common practice in Japan, dating to the Meiji Era (1868-1912),” Kamikawa said.

But retaining spaces to stamp with a hanko on forms may invite the misunderstanding that people must use a personal seal on them and complicate the government's move to digitize administrative procedures.

The central government has submitted a package of “digital transformation bills” to the Diet containing a provision to amend the Family Register Law so signatures alone will suffice for related formalities. The Upper House is deliberating them in the current ordinary Diet session after the Lower House approved the bills on April 6.

The Justice Ministry plans to revise its document formatting regulations accordingly, but it will still retain stamping spaces in the related formats, and add a clear statement saying that filling out those spaces is not mandatory.

The ministry has conveyed its unofficial plan to the hanko lawmakers’ league, which covers formalities related to family registers, including notifications of marriage, divorce, birth, death and adoption. As things now stand, they all require both signatures and hanko seals.

The Cabinet Office department that is in charge of the shift away from hanko requirements takes the stance that retaining the practice of stamping is OK as long as it remains an option for those who want it, if only it will not be misunderstood as mandatory.

Hanko will disappear from the majority of administrative procedures when the digital transformation bills have been passed and enforced. Personal seals will no longer be required on “moving out” and “moving in” notification forms for having resident records transferred across municipalities, for example.

Every year, municipal governments receive a total of some 10 million such notification forms, which fall under the jurisdiction of the internal affairs ministry.

The central government is striving to spread the practice of online applications to make public administration services faster and more convenient.

Hanko requirements have been cited as an obstacle to the move to go online since paper is used for stamping.

Masahiko Shoji, a professor of information sociology with Musashi University, urged the government to "make it clear that formalities can be fulfilled online, in principle, to lessen the workload of users and municipal government officials.”

He added that if the government keeps procedures that use paper, “municipal governments should devise measures against the increased burden on front-line workers.”