Survey: Not a single prefecture backs reuse of radioactive soil 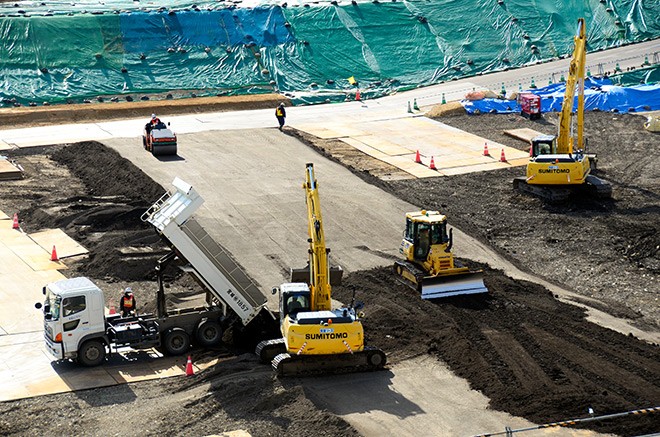 Workers bury contaminated soil after it was transported to the Interim Storage Facility for radioactive soil that straddles Okuma and Futaba, both in Fukushima Prefecture, in February. (Keitaro Fukuchi)

A central government plan to reuse mountains of contaminated soil generated from land cleanup operations after the 3/11 Fukushima nuclear disaster got a muted response from other prefectures, an Asahi Shimbun survey shows.

The survey of the nation's prefectural governors, with the exception of Fukushima Prefecture, found zero support for the reuse of contaminated dirt for farmland development or road construction projects.

Five governors, those in Yamagata, Yamanashi, Nagasaki, Kagoshima and Okinawa, flatly expressed opposition to any reuse, regardless of projects the government has in mind.

All the other governors stood on the sidelines, citing doubts about the safety of the soil or their preference not to answer, the survey showed.

The topsoil was removed during cleanup operations in municipalities affected by the triple meltdown at the Fukushima No. 1 nuclear power plant following the Great East Japan Earthquake and tsunami in March 2011.

The government is required by law to dispose of the polluted dirt by 2045 once it is removed from Fukushima Prefecture.

Okuma and Futaba, the towns that co-host the stricken Fukushima No. 1 nuclear power plant, are home to an interim storage facility for the radioactive soil.

Only soil measuring up to 8,000 becquerels per kilogram will be reused to ensure that annual radiation doses from exposure are too low to affect human health.

The volume of polluted soil to be gathered at the facility is expected to reach 14 million cubic meters, the equivalent of 11 Tokyo Dome baseball stadiums, by spring 2022.

The central government plans to use 80 percent of the overall soil stored there after concluding it was unrealistic to expect to dispose of all the dirt.

It is promoting the reuse of relatively low-level radioactive dirt for farmland development or road construction with the proviso it is covered by regular soil.

The central government envisages issuing guidance by fiscal 2024 on where such soil can be used and how to manage it.

When asked in the survey if their prefecture may become the final disposal site, eight governors rejected the idea outright.

The remaining governors said either they cannot answer or refused to take a stand, referring to the central government’s failure to explain the selection process to the public.

The survey was conducted between January and February and involved sending questionnaires to the governors.

(This article was written by Keitaro Fukuchi and Masatoshi Toda.)