Saitama first in Japan to enforce no-walk etiquette on escalators 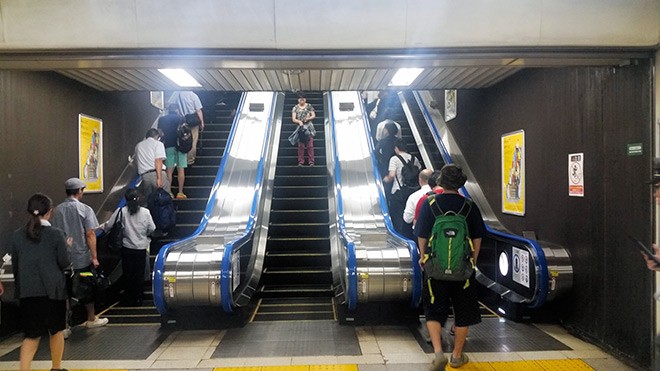 Train passengers stand on the left side of escalators at JR Shinbashi Station in Tokyo, which is standard practice in the capital. (Asahi Shimbun file photo)

SAITAMA--Authorities in this prefecture just north of Tokyo are moving to enforce escalator etiquette to crack down on falls and injuries, such as those caused by passengers rushing for trains.

Under an ordinance that goes into force on Oct. 1, users are required to stand still and not walk up or down.

The Saitama prefectural assembly enacted a draft ordinance regulating escalator use at a session on March 26, making it the first in the nation to do so, according to assembly members of the Liberal Democratic Party, the largest group in the assembly, who sponsored it.

“We need to deliver a strong message to the public to alter practices that have become so pervasive as to be perceived as custom,” said Shinichi Nakayashiki, chief of policy affairs of the LDP assembly group, in referring to the significance of the ordinance.

Escalator operators will be obliged to keep users informed about the safe use of equipment.

The prefectural government can issue guidance or a warning to operators whose efforts to get users abide by the new rule are deemed to fall short.

However, the ordinance carries no penalty for users and operators if they breach the rule.

Nationwide, there were 805 cases of injury involving people moving on escalators between January 2018 and December 2019, according to data by the Japan Elevator Association, an industry group.

The Tokyo-based association called on users to remain still and hold the handrail when using an escalator, saying the equipment is not designed to anticipate sudden movements.