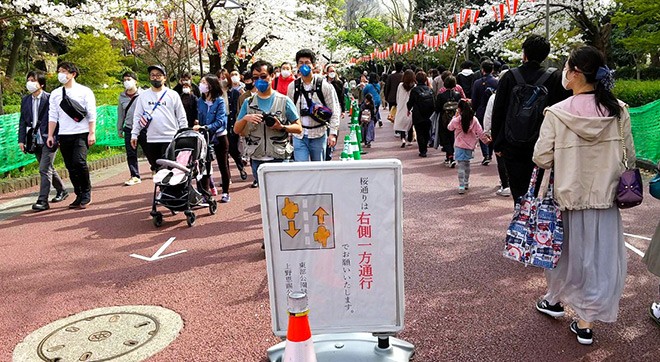 Tokyo confirmed 313 fresh COVID-19 cases on March 28, bringing the daily average for the week to 351.0, above the peak marked during the second wave of novel coronavirus infections last summer.

It was the ninth consecutive day for the daily tally to exceed a week-earlier level. The figure on March 28 was 41 more than the 272 cases reported on March 21.

The highest daily average during the second wave was the 346.1 cases for the week through Aug. 5.

Tokyo metropolitan government officials are bracing for a resurgence of novel coronavirus infections following the lifting of the state of emergency declaration for the capital and three surrounding prefectures on March 22.

“It will not be surprising if (the daily tally) reaches the 1,000 mark in Tokyo in two weeks,” Governor Yuriko Koike said March 26, pointing to a sharp increase of new COVID-19 cases in Osaka Prefecture, where the state of emergency declaration was lifted on March 1.

Norio Omagari, director of the Disease Control and Prevention Center under the National Center for Global Health and Medicine, warned at a metropolitan government meeting on March 25 that infections could spread more sharply than during the third wave if people turn out as in usual years for cherry blossom viewing events and welcoming and farewell parties.