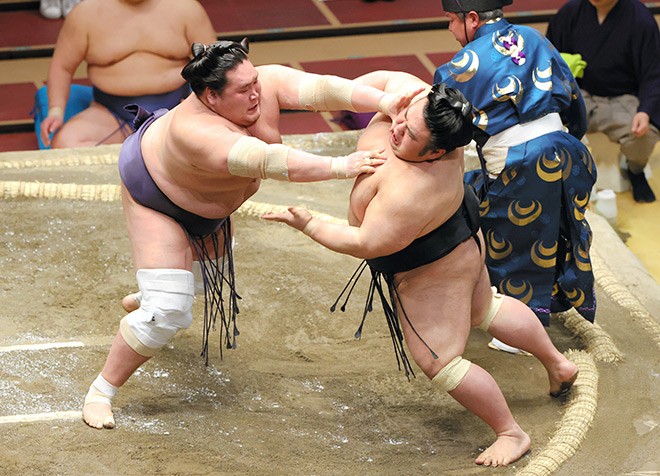 Sekiwake Terunofuji grabbed his third career championship with a 12-3 record in the Spring Grand Sumo Tournament in Tokyo on March 28, virtually guaranteeing his promotion back to sumo’s second highest rank of ozeki.

Terunofuji forced out ozeki Takakeisho, who was one win behind, on the last day of the 15-day tourney, shattering the latter's hopes of forcing a playoff.

“I was relieved to win,” Terunofuji said during an interview after he was handed the Emperor’s Cup. “Without support from my fans, I would not have made a comeback here, so please continue to support me.”

Terunofuji, who is 29 and hails from Mongolia, emerged as the solo leader on March 27 by posting a convincing win against ozeki Asanoyama after co-leader komusubi Takayasu lost his bout earlier that day and fell out of contention for the lead.

Terunofuji’s record of piling up 36 wins in the latest three tournaments easily cleared the Japan Sumo Association's basic requirement of 33 wins to be promoted to ozeki.

He was first promoted to ozeki in 2015 after capturing his first championship and remained in the rank for 14 successive tourneys.

But he was eventually relegated to sumo’s second-lowest jonidan division as he struggled with persistent injuries and sickness.

Terunofuji steadily crawled back to the highest makuuchi division, adding another championship in the July Grand Sumo Tournament in 2020.

Terunofuji's return to ozeki from the jonidan division was described as the “the biggest comeback in history.”

He was said to have considered retiring from sumo when his career hit its lowest ebb.

“I am so glad I did not quit sumo,” Terunofuji said during the interview.

The tournament at the Ryogoku Kokugikan opened with yokozuna Hakuso returning to the dohyo after recovering from COVID-19.

But the highest-ranked wrestler dropped out of the tourney on the third day after his doctor declared a knee injury needed two months of recuperation.

Fellow yokozuna Kakuryu stayed away from the March tournament from the outset due to injuries. He later announced his retirement from the sport, leaving Hakuho the only wrestler in sumo’s highest rank.