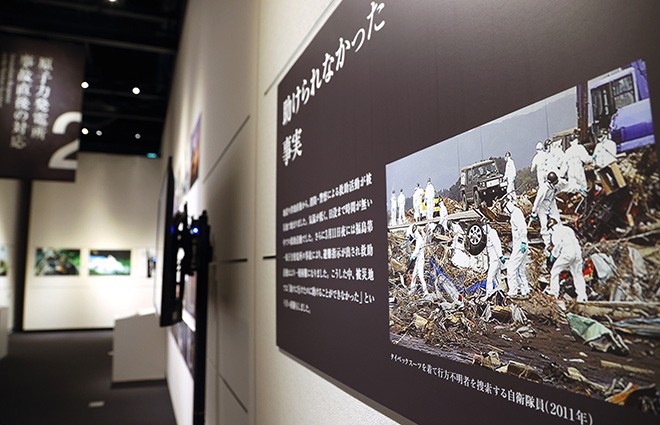 FUTABA, Fukushima Prefecture--A museum dedicated to the 2011 earthquake, tsunami and nuclear disaster got a history lesson of its own, when criticism arose that it failed to offer a complete picture of the Fukushima nuclear accident.

The Great East Japan Earthquake and Nuclear Disaster Memorial Museum here has updated exhibits on inadequate precautions and poor responses following the triple meltdown at the Fukushima No. 1 nuclear plant triggered by the magnitude-9.0 earthquake and tsunami.

Seventy or so photographs, panels and other showpieces were added in late March based on the opinions from prefectural residents and media organizations.

“The new items reflect the various voices that we have received,” said Takashi Kobayashi, vice director of the museum. “We will continue to review our exhibits and organize special displays.”

While no explanation was given about flaws in tsunami countermeasures, a description has been added about “the collapse of the safety myth: a man-made calamity caused by failed measures,” citing the reports of the Diet and central government investigation committees.

Another exhibit explains that prefectural officials failed to utilize data from the System for Prediction of Environmental Emergency Dose Information (SPEEDI) for residents’ evacuation because most of the radiation level forecasts received by email were deleted.

Without any orders from the central and prefectural governments, municipal government officials had to decide on their own whether to instruct residents to take stable iodine tablets to reduce radiation exposure to the thyroid.

An explanation has been added that the governor of Fukushima and other officials did not order the agent to be administered.

Details were also tacked on to describe how 40 patients at Futaba Hospital in Okuma, Fukushima Prefecture, died during and after evacuation by the end of March 2011.

Shinobu Goto, an associate professor of environmental planning at Fukushima University, welcomed the update, saying, “Information about failures was completely absent, but some explanations have been included.”

He expects the museum will continue to make improvements to tell visitors that the nuclear accident should never be repeated.

As an example, Goto cited an exhibit about the fact that central government officials had assumed that the accident could worsen further.

The prefectural museum opened in September to hand down lessons from the Great East Japan Earthquake, tsunami and the Fukushima nuclear accident. The towns of Futaba and Okuma co-host the crippled nuclear plant.