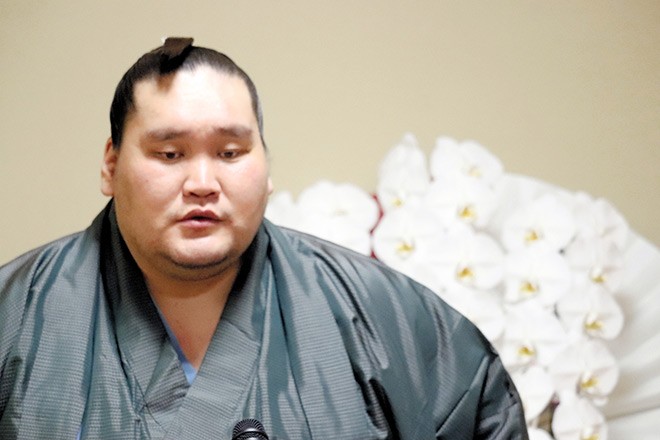 Terunofuji speaks at an online news conference on March 29. (Provided by the Japan Sumo Association)

Two years ago, hobbled by injuries and relegated to the lower ranks of his sport, Terunofuji hit rock bottom and wanted to hang up his mawashi belt for good.

But thanks to the faith of his coach and support from his wife, the 29-year-old wrestler has risen from the dead to reclaim the limelight.

A day after winning the Spring Grand Sumo Tournament in Tokyo and virtually assuring a promotion to rejoin sumo's second highest rank of ozeki, Terunofuji expressed his appreciation.

"When I was injured and in a wheelchair, I found myself trying desperately to live," he said at an online news conference on March 29. "I learned how important a day means at that time. I think I have reached the point here thanks to the support from the people around me."

The Japan Sumo Association will formally decide on Terunofuji's promotion to ozeki on March 31.

His remarkable turnaround in fortune is being called the "biggest comeback" in the traditional sport's history.

The sekiwake clinched his third top-division championship with a 12-3 record in the Spring Grand Sumo Tournament on March 28.

“This is a result of me doing my best desperately and positively, trying to make every day count,” Terunofuji said during an interview after his victory over ozeki Takakeisho to seal the Emperor's Cup.

“Thank goodness I believed in doing that,” he added.

It has been a long and rocky road back for the wrestler, originally from Mongolia, who burst onto the scene in making his juryo debut in September 2013.

Terunofuji rose to the ozeki ranks in 2015. He became a formidable presence in the dohyo, as his strength and power overwhelmed his opponents, and he appeared to be impervious to nerves.

But injuries to both knees and also diabetes and hepatitis sapped his strength.

After the fall tournament in September 2017, Terunofuji tumbled from the ozeki ranks. He often was forced to pull out of a tournament.

More than once or twice, he told his stablemaster Isegahama that he wanted to quit.

But a few things kept him going.

One was his wife, whom he married in February 2018.

Embarking on a comeback, he gave up drinking, a vice that he loved. His wife cooked meals for him based on nutritional advice from his doctor.

In March 2019, Terunofuji returned to the dohyo at the Spring Grand Sumo Tournament held in Osaka for the first time after sitting out four consecutive tournaments.

He had to start over again from sumo’s second-lowest jonidan division, a humbling fall for someone who had once been one of the sport's most promising stars.

Terunofuji competed in the morning matches, in front of only a sprinkling of spectators, hours before the stands would start filling up for the top division bouts.

Terunofuji was no longer in the top two professional sekitori divisions, which means he did not receive a monthly salary or any of the perks, including having an assistant to take care of his chores.

In the dressing room before his bouts, he sat quietly in a corner close to the entrance.

After each bout, Terunofuji removed the tape from his body and would take off the mawashi on his own. He then cleaned his space and would vacate the room before sekitori wrestlers arrived for their prime-time bouts.

While doing so, he was often heard muttering, “Ouch!” apparently in pain even while performing mundane tasks.

But since then, Terunofuji has kept his record over .500 as he made steady progress in climbing back up the ranks.

At the July Grand Sumo Tournament in 2020, the then No. 17 maegashira came out of nowhere to win his first top division championship since 2015, with a stunning 13-2 record.

“I’m going back to where I once was,” Terunofuji kept telling himself, aiming to reclaim his ozeki rank.

With his latest double-digit tally of wins, he has far cleared the Japan Sumo Association's bar of 33 wins in the latest three tournaments to be promoted to ozeki.

Terunofuji has 36, including the championship, to make the association's decision a mere formality.

No wrestler has returned to ozeki after falling to maegashira or the lower ranks under the current system, which was established at the tourney in Nagoya in 1969, except Kaiketsu, who accomplished the return from No. 6 maegashira in 1977.

If Terunofuji becomes an ozeki again, it will mark a historic achievement.

Fans are also filled with high expectations that Terunofuji will continue his inspiring comeback and someday win promotion to yokozuna, the sport's highest rank.

“If I keep doing my very best each and every tournament, it will lead to the next thing,” he said.

(This article was written by Yuki Omata and Ryusaburo Matsumoto.)