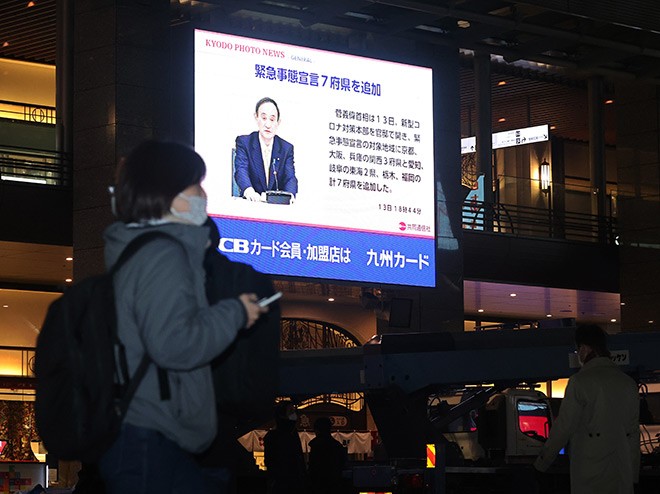 Fukuoka Prefecture remained under a state of emergency declaration over the novel coronavirus from Jan. 13 through March 1. (Asahi Shimbun file photo)

A hotel in Fukuoka has caused a legal stir in the accommodation industry by telling guests they would be charged for cleaning fees if they later tested positive for the novel coronavirus.

Legal experts say the hotel was out of line with such demands, but those in the industry argue that the related law does not address the current challenge of how they can recoup certain losses caused by the COVID-19 pandemic.

In early February, a vocational school in Fukuoka’s Higashi Ward partially closed a dormitory where a student was found infected with the virus.

Five other students at the dormitory decided to stay at a nearby hotel to prepare for national exams scheduled on Feb. 21 and 22.

A public health center told the students that they did not need to take a polymerase chain reaction (PCR) test nor self-quarantine.

Several days after they checked in at the hotel, they decided to extend their stay. At the time, the students told a hotel employee that there had been a COVID-19 case at their school.

The hotel then delivered its demands.

“If you turn out to be carrying the virus, we will charge you 100,000 yen ($910) for cleaning fees,” the hotel told the students. “If that leads other guests to cancel their reservations, then we will also ask you to make up for the loss.”

The five students left the hotel and stayed at their friends’ and other places to continue to study.

Some of the students were crying in shock and consulted the school about the hotel’s demands, according to school officials.

“They were not in close contact with the student who tested positive,” one official said. “Isn’t it a discriminatory response to ask the students to pay for cleaning fees even though the risk of them spreading the virus is low?”

The five students did not show any COVID-19 symptoms.

But the hotel rebutted the school’s discrimination claim, saying, “We did not refuse accommodation to them.”

The hotel also said its response to the five students was based on a previous experience of dealing with the effects of an infection at the school.

In 2020, the vocational school closed its dormitory after a student contracted the virus. Another dorm resident then booked into the hotel and tested positive for the virus there.

Hotel staff said they were not informed of the source of the student’s infection and whether the hotel guest had been in close contact with the first COVID-19 patient.

The student paid for the costs of disinfecting the room.

The company that manages the hotel said last year’s incident “caused trouble and concerns for other guests.”

“Based on what we learned from that incident, we have asked guests to provide as much detailed information as possible on the premise that they will cooperate,” a company official said.

Under the Hotel Business Law, hotels cannot refuse accommodations to guests except in certain situations, such as if the would-be guest has clearly contracted a contagious disease.

The health ministry has said hotels can cite the novel coronavirus as a reason to refuse accommodations but only to those who have tested positive. Hotels cannot refuse rooms to people simply because they may have been in close contact with COVID-19 patients, the ministry said.

A Fukuoka city government official who is in charge of environmental health said businesses “should contact a public health center and ask what to do when the situation is difficult to determine.”

Shunsuke Itai, a lawyer specializing in such issues, said, “It is not surprising that guests feel that they have been refused a room when (a hotel) suggests they pay damages that are higher than the hotel’s normal room fee.”

What the hotel told the five students “is deemed a de facto refusal of a room and problematic,” he said.

“I understand it is difficult for hotels to respond (in such situations), but the businesses need to give consideration to avoid hurting a guest’s feelings even when the guest is possibly carrying the virus,” Itai said.

However, some in the accommodation industry say the law is outdated and needs to be revised.

Yoshinori Ochi, a professor at Toyo University who serves as an adviser to the Japan Association of Travel Agents, said there have been cases in which hotels suffer from false rumors and reputational damage after a guest tested positive for the virus while staying there.

Ochi said industry groups have called for legal revisions to address such problems.

“Asking guests to pay to make up for losses caused by cancellations made by other guests is over the top,” Ochi said. “But the central government should establish an operational rule beforehand and clearly explain it to the industry. It should also provide separate facilities for people who have been in contact with COVID-19 patients to wait and see (if they are also infected.)”

(This article was written by Takahiro Takenouchi, Amane Shimazaki and Hayato Jinno.)