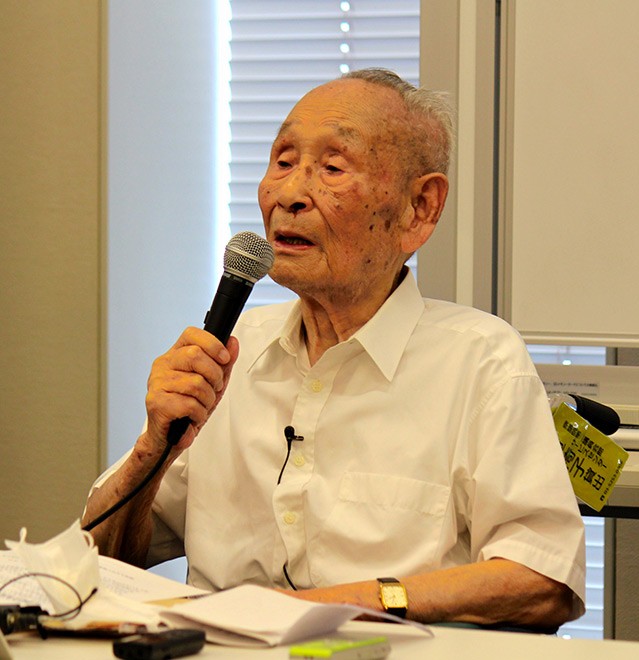 Lee Hak-rae, a Korean convicted of war crimes for his actions as a POW guard during World War II, calls for legislation to provide special benefits to non-Japanese Class B or C war criminals at a news conference in Tokyo in June 2020. (Asahi Shimbun file photo)

Lee Hak-rae, an ethnic Korean who long sought compensation from the Japanese government after being convicted of war crimes, died of traumatic subarachnoid hemorrhage at a Tokyo hospital on March 28. He was 96.

His family said it will hold a private funeral.

Born in 1925 in what is now Jeollanam-do province in South Korea, Lee was treated as a Japanese because the Korean Peninsula was under Japanese colonial rule from 1910 until the nation’s defeat in World War II in 1945.

During the war, he served the Japanese military as a civilian employee and worked as a guard at a prisoner of war camp in Thailand.

After the war ended, Allied forces prosecuted Lee on charges of abusing POWs. A court in Singapore held Lee responsible for the deaths of many POWs by forcing them to work at a construction site for the Thai-Burma Railway, also known as the infamous “Death Railway.”

Lee was convicted as a Class B or C war criminal and sentenced to death by hanging. After the death sentence was commuted, he was transferred to a prison in Tokyo and granted temporary release in 1956.

Lee lost his Japanese nationality after Japan regained its sovereignty under the San Francisco Peace Treaty in 1952. That made him ineligible for military pensions that former Japanese war criminals received.

Lee set up a group called “Doshinkai” with other former Class B or C war criminals from the Korean Peninsula to seek redress from the Japanese government and restore their honor.

“Why does the Japanese government discriminate against us while former Japanese war criminals had access to military pensions and benefits?” he would ask.

The South Korean government had long treated Lee and other Koreans convicted of Class B or C war crimes as allies of Japan during the war. But in 2006, Seoul recognized them as victims of Japan’s colonialism.

Lee ran a taxi company in Tokyo he jointly established with other former war criminals. He was rushed to a hospital after he hit his head and broke his leg in a fall at his home on March 24.