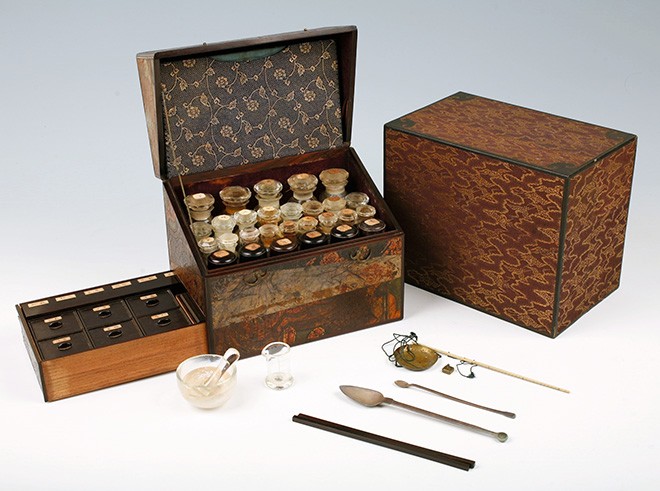 The medicine chest believed to have been used by Ogata Koan during his later years contains medicine bottles and other items. (Provided by Kyoko Takahashi)

OSAKA--The mysterious contents of a sealed glass bottle used by a noted feudal-era doctor of Western medicine have been identified through muonic X-ray analysis.

With age, the medicine bottle that Ogata Koan (1810-1863) is thought to have used for his house calls and other purposes has become impossible to open.

But by using muons, a type of elementary particle that can pass through glass and other materials, researchers “saw through” the 3-millimeter-thick glass and confirmed that the white power inside the bottle is mercuric chloride.

The researchers from Osaka University and other institutions scanned the bottle with muons at the Japan Proton Accelerator Research Complex (J-Parc), a high-intensity proton accelerator facility in Tokai, Ibaraki Prefecture.

During the closing days of the Edo Period (1603-1867), Ogata established Tekijuku, an academy for Rangaku (Western technology and medicine), said to be the origin of Osaka University’s Faculty of Medicine, and made contributions in medicine and education.

Two medicine chests that he used are housed at Osaka University. One, which he used during his later years, contains 22 glass bottles and six wooden cylinders.

About half of the containers had become locked tight, so no one knew for sure what they held.

But one bottle held a hint as its lid was marked with a kanji character for “kan,” the first of two characters that stand for “kanko,” or mercuric chloride.

When muons strike a substance, the impact generates light with different characteristics depending on the substance. A close analysis of the light can reveal the nature of the substance.

When muons passed through the glass bottle, the researchers detected light energies from its contents that were typical of mercury and chlorine.

In Ogata’s days, mercuric chloride was used as a laxative and for other purposes. The substance is no longer used because it is highly toxic.

“It is thought that kanko was not used by itself, but was blended with other medicinal substances to treat patients suffering from strokes and rheumatism-like symptoms,” Kyoko Takahashi, a guest professor at the Museum of Osaka University specializing in pharmacognosy, said, citing an analysis of letters in which Ogata provided treatment instructions.