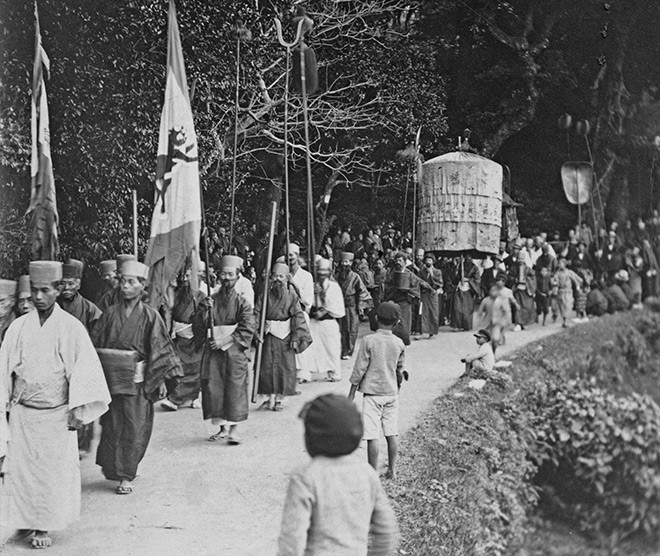 Teachers and students with what is now Shuri High School re-enact a pilgrimage made by the king of the Ryukyu Kingdom in Naha on Dec. 12, 1930. Umbrellas and a palanquin used by the Sho kings were used in the parade, as the Sho family rented them. Participants, with headbands on, dress as kingdom bureaucrats. (Asahi Shimbun file photo)

In a rare, recently unearthed photo believed to have been shot in 1935, two women walk barefoot carrying large cargo on their heads in what is now Naha, the capital of Okinawa Prefecture.

Experts say the discovery of the photo, along with a cache of other images of a similar vintage, provides a rare glimpse of daily life in prewar Okinawa.

At the time, Okinawans were trying to adjust to a Japanese way of life after the Meiji government (1868-1912) ended rule of the independent Ryukyu Kingdom (1429-1879) and made it into the prefecture of Okinawa. But there are few surviving slice-of-life photos like these from the time.

The woman walking ahead in the photo carries a Buddhist shrine and a chair, while the other brings a costume box. Behind them is a shop that appears to sell furniture. The women may have been asked to carry them at the request of somebody else.

Both women wear kimono, but in different styles.

They represent the blending of Japanese and Ryukyu styles adopted by local women at the time, according to Ichiko Yonamine, a researcher of the history of dyeing technology at the Okinawa Prefectural Museum and Art Museum.

Under the direction of the central government of Japan since the 1890s, Okinawans had to learn to speak standard Japanese, instead of a local dialect, as well as adopt Japanese manners and customs.

Wearing outfits commonly worn by women on the main islands is one of the customs local women tried to emulate.

“They were under societal pressure to conform to the Japanese style, but they could not take it up in its entirety,” she said. “So, the women blended traditional Ryukyu and Japanese styles.”

Back in the 1930s, it was common for ordinary people to walk barefoot in Okinawa, as the prefecture lacked both the materials and techniques to make sandals.

But walking shoeless was prohibited in Naha in 1941 after the southernmost prefecture began to step up efforts to draw in tourists.

Local authorities decided that the sight of islanders strolling barefoot would damage the image of Okinawa.

The photo of the two women is one of 165 prints capturing Okinawans in prewar years that turned up recently at the Osaka headquarters of The Asahi Shimbun. They were discovered during a search of photos of Shuri-jo castle shot before World War II. The search began after the castle burned down in a fire in October 2019.

The Asahi Shimbun analyzed and reported on the photos along with The Okinawa Times, a newspaper based in Okinawa Prefecture.

In another photo, two men--one with a decidedly muscular figure and the other with a large build donning a belly band--perform in a karate exhibition match before a large audience at an athletic field in Osaka around 1933.

The men, both Okinawans, have been identified as Kanei Uechi (1911-1991), who taught Uechi Ryu karate, a traditional style of Okinawan karate, and Kaei Akamine (1908-1977), a businessman who chaired the Okinawan sumo association.

Okinawan karate is said to trace its roots to the Ryukyu Kingdom. Uechi and Akamine trained in karate at a dojo in Wakayama opened by Uechi’s father, the founder of Uechi Ryu karate.

In the 1930s, many Okinawans traveled to the Kansai region as migrant workers, after the prefecture was pounded by a deep economic recession.

But they faced widespread discrimination while searching for jobs and apartments. It was not rare for them to run into a sign that read, “No Ryukyu people or Koreans.”

As a result, many islanders tended not to perform Okinawan songs and dance in the public through the 1970s out of fear of discrimination, according to Kaoru Kanagusuku-Kinjo, a researcher who collects historical documents on Okinawa at the Kansai-Okinawa library in Osaka.

The photo of the two men surprised him.

“We believed that islanders strove to preserve Okinawan culture among themselves since the prewar years as part of their defense against discrimination,” Kanagusuku-Kinjo said. “But these two men are trying to vigorously present Okinawan culture to the outside world.”

Uechi returned to Okinawa to open his dojo and survived the 1945 Battle of Okinawa. He has since opened 300 dojos around the world, including in the United States and France, according to data from the Okinawa prefectural government.

Masaaki Hokama, researcher of the Naha City Museum of History in Naha, said the photos that recently turned up provide invaluable clues about islanders because they were captured from the perspective of people from Japan’s main islands.

“Back then, cameras and film were not commonly used in Okinawa,” he said. “Families occasionally had commemorative photos of their families taken, but pictures showing the daily lives of islanders and local scenery were rarely taken.”

Hokama noted only a limited number of photos shot before World War II survive in the prefecture because most were destroyed in fires during the Battle of Okinawa.

“These photos (kept at The Asahi Shimbun) survived because they were taken to Japan’s main island,” he said.