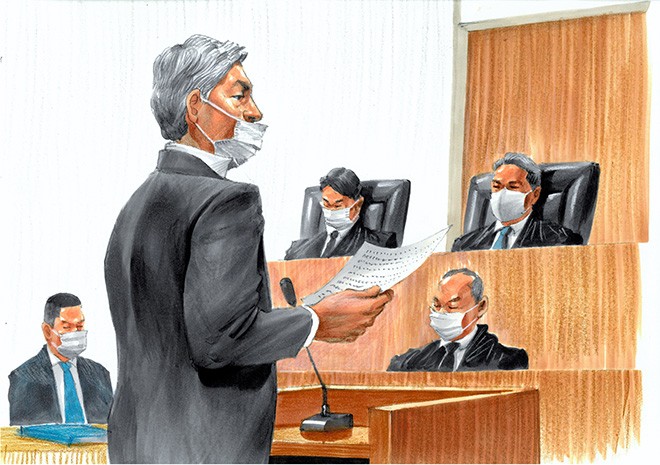 Tsukasa Akimoto pleads not guilty to bribe charges at the Tokyo District Court on March 29. (Illustration by Kageyoshi Koyanagi)

Lower House member Tsukasa Akimoto pleaded not guilty to all charges in a bribery scandal over casino development plans at the first hearing of his trial at the Tokyo District Court on March 29.

“I am innocent of all the indictments,” he said.

Akimoto, 49, is accused of accepting bribes from a Chinese gaming company that was seeking to join Japan’s program to build integrated resorts, including casinos, and bribing witnesses.

Dressed in a business suit at the hearing, Akimoto made his first public appearance since his arrest on suspicion of bribing witnesses last August.

He was not wearing his Diet member’s badge, but when the presiding judge asked him his occupation, he answered, “Lower House member.”

For about five minutes, Akimoto denied all of the charges, quickly saying “impossible” or “nothing happened” when the allegations were read.

The Chinese company also paid about 2.6 million yen for travel and other expenses for his visit to its headquarters in China and other places.

At the time, Akimoto was serving as a senior vice minister in the Cabinet Office and oversaw the government’s plan to open integrated resorts to bolster the economy.

Prosecutors said Akimoto knew the purpose of money was to help the Chinese company win rights to integrated resort projects in Japan, and that he provided information to the company about legislation related to the integrated-resort program.

They also said that Akimoto prepared part of the money for his supporters to bribe witnesses into giving false testimony in court. He even received progress reports on those bribes, prosecutors said.

Eight people have already been found guilty in the bribery scandal.

Some of the defendants testified that they handed 3 million yen in a paper bag to Akimoto, who said, “Thank you.”

In another court hearing, Akimoto’s supporters said he had asked them to bribe witnesses.

Akihiro Toyoshima, 42, Akimoto’s former policy secretary who is charged with the joint offense of accepting bribes, has also pleaded not guilty and denied that Akimoto was involved in the case.