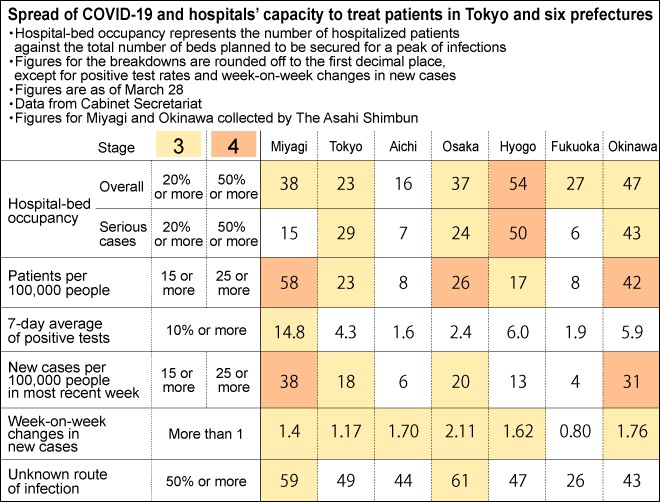 Thirty-four of Japan’s 47 prefectures, both rural and densely populated, are experiencing new surges in novel coronavirus infections since the last state of emergency in the country was lifted.

Although the daily average in new COVID-19 case for the seven days to March 2 fell below 1,000, it rebounded to 1,713 for the week until March 28, according to data from the Cabinet Secretariat.

The central government ended the state of emergency for Tokyo and the three surrounding prefectures of Kanagawa, Saitama and Chiba on March 21, after putting it in place on Jan. 8.

Tokyo and 33 prefectures have all logged higher daily averages than those in the previous week, according to data.

The surge has been particularly pronounced in the Kansai region, where the infection trajectory had stabilized under a state of emergency that was put in place there between Jan. 14 and Feb. 28.

The virus situation in Osaka Prefecture is now assessed at stage 3, the second most serious level, in five of seven categories set by the central government’s expert panel dealing with the pandemic.

The number of COVID-19 patients per 100,000 population in the prefecture was 26, meaning stage 4, or an “explosion” of infections.

If a prefecture falls into stage 4 in one of the categories, the central government can consider issuing a state of emergency there.

The seven-day average of positive tests was the only category in which Osaka Prefecture cleared both stage 3 and 4.

Tokyo is assessed at stage 3 in four categories, including hospital-bed occupancy rate and the number of COVID-19 patients per 100,000 people.

Elsewhere, cluster infections led in part to an increase in new cases per 100,000 people in the most recent week, pushing Miyagi and Okinawa prefectures to stage 4 and Yamagata Prefecture to stage 3 in that category.

After a steady decline over previous weeks, the hospital-bed occupancy rate is again rising in such prefectures as Chiba, Aichi and Osaka.

Hyogo Prefecture, where 54 percent of the COVID-19 hospital beds are filled, is now classified in stage 4. Another troubling sign is that many people are being infected with COVID-19 variants in the prefecture.

The total number of COVID-19 patients across the country has reached nearly the same level as on Nov. 20, when the central government expert panel called for stringent anti-virus measures for areas that were assessed at stage 3.

In November, however, restaurants and other businesses in Tokyo and Osaka Prefecture were not cutting their operating hours.

Satoshi Hori, a professor of infection control science at Juntendo University, said the country is at the beginning of the fourth wave of infections and warned that the situation could worsen in the coming weeks.

“The virus could rapidly circulate in the middle of April, forcing the central government to consider declaring another state of emergency during the Golden Week holidays,” he said.

Hori noted that the more infectious variant strains of the novel coronavirus are a new source of concern in the country’s battle against the pandemic.

As for cluster infections that have occurred in many parts of Japan through dinner gatherings and karaoke parties, Hori said people are becoming lax about precautions after weeks of restricting their movements.

He also pointed out that some restaurants are not being thorough with measures to halt the spread of the virus.

Although partitions were set up on tables to block potentially infectious airborne droplets, some restaurants are failing to frequently ventilate the air or are allowing customers to converse without masks, he said.

“Now is the time for authorities to promote the understanding of appropriate coronavirus measures through a video that is easy to understand or other means,” he said.

(This article was compiled from reports by Akiyoshi Abe and Hajime Mikami.)