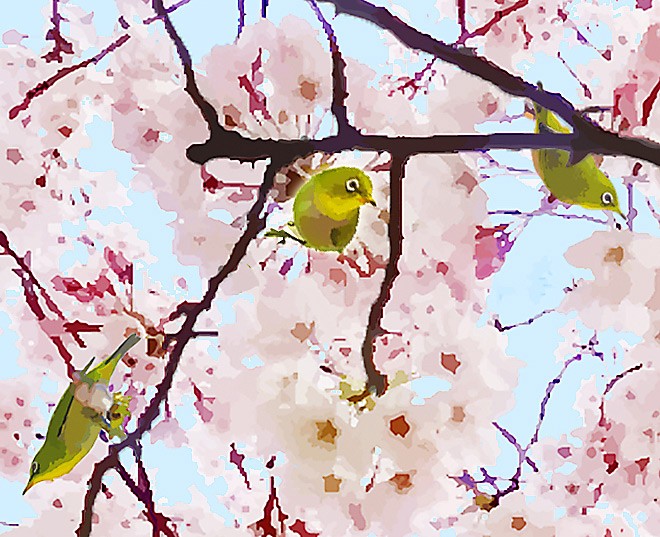 back and forth
from suet to nest
jaybirds
--Paul Geiger (Sebastopol, California)

my new dentures--
how hard is it to say
Asahi haikuist
--Aljosa Vukovic (Sibenik, Croatia)

The haikuist tried out a new set of false teeth. This issue marks 26 years of publishing lighthearted, as well as painstakingly composed, haiku by our readers. Marek Printer is proud of his boy’s progress in Poland. Mark Manalang wrote his debut haiku for this column in Manila’s Chinatown.

Today is Good Friday, when Christians commemorate the crucifixion and death of Jesus Christ. Celebrations include a church service on the meaning of life after death, decorations of pure white lilies and hunting for eggs. The Easter lily is native to the Ryukyu islands. In Panchkula, India, Vandana Parashar paid homage to a tree mentioned in the Bible. Lucia Fontana’s family fashioned prayer beads from large seeds in Milan, Italy. Rose Menyon Heflin looked heavenward from Madison, Wisconsin.

Satoru Kanematsu felt protected by a statue posed with legs crossed and hands on the lap. Mary White placed one hand in the other with her palms facing heaven above Dublin, Ireland. In Swansea, Wales, Jim Young reflected on the temporary nature of the human condition.

alone all day
one hand nesting
in the other

in the gale
Buddha is still sitting still
everything passes

evening zikr…
I come across
my real shadow

John S. Gilbertson faced a hill to climb in Greenville, South Carolina. Lenard D. Moore mailed his haiku from North Carolina. Aaron Ozment wondered how high he has to climb.

Tsanka Shishkova’s uphill climb was fruitful, leading her to write this line: the scent of spring plums on the hill.

Stephen Toft wrote this one-liner about whispering to cattle in Lancaster, U.K.: spring blossom i sing to the bull.

Wade German made a pilgrimage in Delta, British Columbia.

Vladislav Hristov bowed under an old, bent evergreen in Plovdiv, Bulgaria. Realizing that Jesus of Nazareth may have been crucified on a cross made from the yew tree, Mario Massimo Zontini counted his blessings in Parma, Italy. Francoise Maurice’s ears perked toward the treetops in Draguignan, France. Kanematsu swayed sacred tree leaves during prayers.

blizzard
I found my home
by the jutting yew

Winter garden--
all the colours pale
but the yew’s

the swept clouds
by the yew tree tops
voice of gales

One “beautiful Easter morning a few years ago,” Ed Bremson said he “was taking a walk,” in Raleigh, North Carolina, and thought of this haiku that has become his all-time favorite:

Marion Clarke recalled how exciting Easter used to be in Warrenpoint, Northern Ireland, when parents hid chocolate eggs for children to find around the home.

Easter Sunday
when chocolate
was still a treat

All winter long, a Japanese “hiyodori” called “hi-yo hi-yo” to Yutaka Kitajima, who then replied to the bird with a click of his tongue. As if an old friend, this remarkable interaction with a wild bird in Joetsu, Niigata Prefecture, he says “helps me outlive these depressive days.”

Perfect sky
for a walk--whispers
the bulbul

Mary Vlooswyk admitted she’s “been trying, unsuccessfully, to spot and photograph a snowy owl” in Calgary, Alberta. Mario Zontini was startled by a large bird of prey in Parma, Italy. Goran Gatalica was amazed by a whirring of colorful annuals of the daisy family in Zagreb, Croatia. Eleonore Nickolay heard the month come in like a lion in Vaires sur Marne, France.

snowy owl
today is a day
to just blend in

In the snow
there is no life⁠--then
a barn owl

Sally A. Fox heard these serenades in the San Francisco Bay Area.

The mockingbirds sing,
The egret calls out, spying
The splash of a fish

Kitajima easily recognized the “Chie-yo, chie-yo, ...” of a white-eye, but lamented, “to catch sight of it is another matter. One of its favorite foods is camellia nectar.” Christof Blumentrath in Sweden, and Ozment in Kagoshima, respectively, were rewarded for their patience.

Somewhere
among camellias
a white-eye

It’s a Good Friday to read http://www.asahi.com/ajw/special/haiku/. The next issues of the Asahi Haikuist Network appear April 16 and 30. Readers are invited to send haiku related to social distancing or going for a spring walk on a postcard to David McMurray at the International University of Kagoshima, Sakanoue 8-34-1, Kagoshima, 891-0197, Japan, or e-mail to <mcmurray@fka.att.ne.jp>.