Survey: 70% say Olympics with no spectators only viable choice 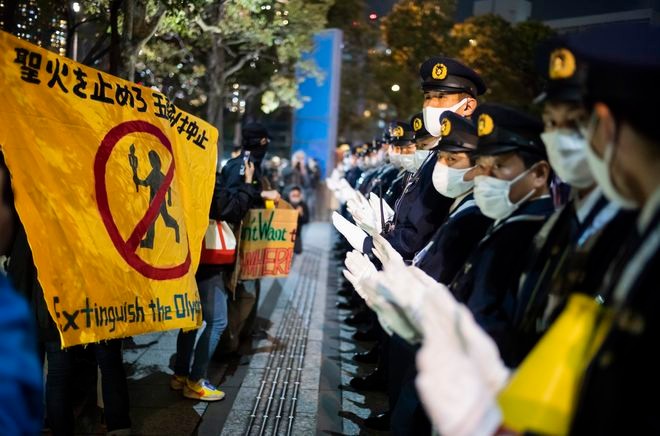 Police officers try to cordon off protesters in Tokyo on March 25, 2021, during a demonstration against the going ahead of the Tokyo 2020 Olympic and Paralympic Games. (AP Photo)

Seventy percent of respondents to a survey think that "no spectators is the only option" if the Tokyo Olympics are held this summer as the COVID-19 pandemic is not contained in Japan and abroad.

In addition, 66.2 percent said that if spectators are allowed into venues, they should be restricted to residents in Japan while maintaining the entry restriction on visitors from abroad, according to the survey conducted by Sanno University’s Sports Management Research Center.

Only 26.6 percent said that they want to watch competitions in person if they can obtain tickets.

The survey, conducted between Jan. 28 and Feb. 2, received responses from 10,000 people in their 20s to 60s across the nation. It was taken prior to the decision announced on March 20 to ban international spectators from attending the Olympics.

Other findings revealed that 64.6 percent supported canceling the Summer and Winter Games until the pandemic is contained around the world.

However, the survey also found that people seem to have a high interest in the competitions.

When the survey was conducted, Tokyo and 10 other prefectures were under a state of emergency due to a high number of COVID-19 cases. The new daily infection cases in Japan exceeded 4,000 on Jan. 28, when the survey kicked off.