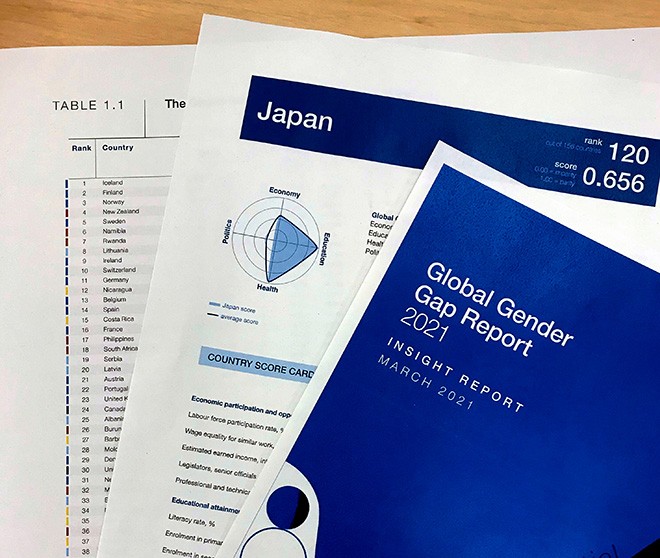 Japan rose just one spot from its 121st ranking in the WEF's last study, in December 2019.

Among the Group of 7 nations, Japan’s ranking placed it well behind the sixth-place nation, Italy, which was 63rd. Germany was in 11th place, followed by France at 16th, Britain at 23rd, Canada at 24th and the United States at 30th.

With 100 percent representing complete gender parity, each nation was given a rating on how close it was to achieving equality.

The study found that the novel coronavirus pandemic set back moves toward gender equality around the world as workplaces where women predominate were more adversely affected, leading to higher unemployment rates for women.

The study concluded that it would take about 136 years to achieve gender equality around the world. The estimate was about 36 years longer than previous calculations.

Nordic nations once again dominated the top of the list. Iceland ranked No. 1, with a rating of 89.2 percent, the 12th time it has topped the list. Finland was in second place with a 86.1 percent rating, followed by Norway at 84.9 percent and Sweden in fifth with a 82.3 percent rating.

Japan managed to inch up one place because of improvements in its education and health sectors. However, the low number of female Cabinet ministers and the few female corporate executives led to low ratings in the political and economic sectors.

Globally, the gender equality rating was 67.7 percent, a decrease of 0.6 percentage point over the last study.

In addition to higher unemployment rates for women due to the pandemic, the study pointed out the possibility that women would face greater hurdles in the workplace due to advances in automation and digitalization.

As the global economy recovers from the pandemic, nations need to find ways to foster equal employment opportunities, the study said.