SUMO/ Terunofuji caps off sensational comeback as he returns to ozeki 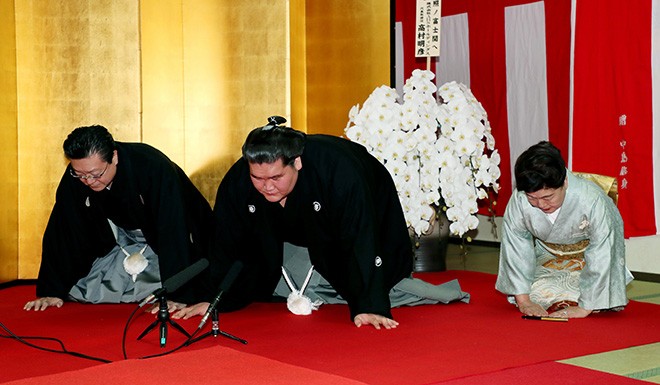 Terunofuji, center, receives a notice that he will be promoted again to ozeki as he bows along with the Isegahama stablemaster and his wife at their stable in Tokyo’s Koto Ward on March 31. (Pool)

Terunofuji ensured that his return to ozeki would be a mere formality with more wins than required--and a championship to boot--but he remained humble on March 31 when it became official.

“I will accept the promotion with great humility," said Terunofuji, 29, at a promotion ceremony at his Isegahama stable in Tokyo.

The Japan Sumo Association decided unanimously at a special meeting at the Ryogoku Kokugikan in Tokyo to promote the sekiwake to the sport's second-highest rank.

Terunofuji rose to ozeki right after the summer tournament in 2015 when he was 23.

But the Mongolian suffered injuries to his knees that hobbled him, and after the fall tournament in September 2017, Terunofuji tumbled from the ozeki ranks. He was forced to miss consecutive tournaments and even entertained thought about quitting the sport.

Two years ago, he started over again from the second-lowest jonidan division. A determined Terunofuji continued his successful comeback, winning the July Grand Sumo Tournament in 2020 in the makuuchi top division for the second time.

He continued his push for promotion to ozeki by capturing the Spring Grand Sumo Tournament in Tokyo that concluded on March 28 with a 12-3 mark.

With his combined 36 wins in the last three tournaments, Terunofuji easily exceeded the JSA's bar of 33 wins to gain promotion.

Terunofuji is only the second former ozeki to return to his former rank after falling to maegashira or the lower ranks under the current system, which was established at the tournament in Nagoya in 1969.

Kaiketsu accomplished the feat in returning from No. 6 maegashira in 1977.