Archive center in Fukuoka passes down lessons of Tetsu Nakamura 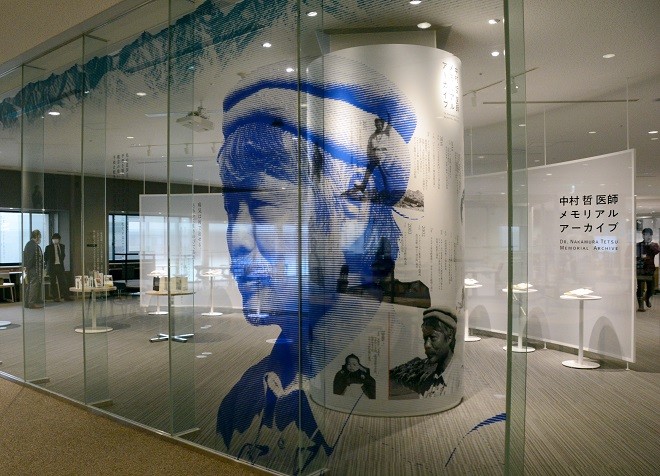 FUKUOKA--An archive center opened here in honor of Tetsu Nakamura, a renowned doctor who devoted his life to humanitarian activities in Afghanistan.

It was established at Kyushu University’s Ito Campus in Fukuoka’s Nishi Ward in hopes of showing Nakamura’s achievements and values through images and documentation.

“Records and footage linked to Nakamura offer us encouragement and tug our heartstrings, although Kyushu University is still lost in deep grief over the surprise news of his passing,” Kyushu University President Tatsuro Ishibashi said at the opening ceremony on March 21. “We will hand down Nakamura’s life story and wishes.”

Nakamura was the local head of the Peshawar-kai nongovernmental organization. He was gunned down in an ambush in Afghanistan in 2019 and died at the age of 73.

Nakamura graduated from Kyushu University’s Department of Medicine in 1973 and served as a special professor at the school from 2014.

“It is our pleasure that a center has been installed in a university to allow many researchers to study them (Nakamura’s accomplishments) and pass them down to posterity,” said Masaru Murakami, president of Peshawar-kai, which supported Nakamura’s activities and helped to introduce the archives. “I would like many people to learn about them.”

The 40-square-meter repository at the university’s Central Library exhibits footage tracing Nakamura’s footsteps in Afghanistan as well as books he authored. Also on display are photos, illustrations and a chronological table detailing Nakamura’s endeavors.

Five of the university’s students and graduate students selected 13 especially impressive phrases Nakamura uttered for inscription on the glass walls in the memorial section.

At the opening ceremony, the students held a discussion session themed on specific words from Nakamura that moved his juniors. The participants read aloud their selected phrases and explained the reasons for their choices.

Urara Hosotani, 22, a senior at the university’s Department of Medicine who was expected to start working as a nurse in April, selected: “Illness can be cured later. All you need to do is stay alive.”

The remark comes from one of Nakamura’s books noting that Afghans are killed by water shortages, not a poorly resourced medical system.

“As a person living in Japan, I did not know such a thing is happening elsewhere,” Hosotani said. “I want those at Kyushu University to turn their eyes to affairs in other parts of the world through the words of Nakamura.”

Daichi Muraguchi, 28, a junior studying at the Department of Medicine to become a physician, said he, too, likes the phrase.

“The sentence vividly depicts the reality where the situation is so strained that even the highly ethical Nakamura had no choice but to say ‘illness later,’” Muraguchi said.

Ryo Takahama, 28, said he encountered a memorable Nakamura phrase while doing research at the university’s graduate school after receiving a diploma at the agricultural department.

The phrase goes: “Simply learning hydraulics and drawing designs will do little to create irrigation canals. Understanding the content of agricultural textbooks will not help you to harvest.”

Takahama said about the message: “Though I love researching, it reminded me of the determination I made when entering the university that I should not only make an impact on the scientific community but also contribute to society.”

Use of the memorial archives will be limited to university insiders for the time being due to the novel coronavirus crisis. After the pandemic ends, the repository will be accessible to ordinary visitors under the plan.

Also on March 21, the Nakamura Tetsu Digital Archive was released on the Kyushu University Library’s website, allowing users to freely check past newspaper reports on Nakamura and his activities as well as documents connected to his speeches.

Items available on the website include articles Nakamura wrote for such newspapers as The Nishinippon Shimbun and The Okinawa Times.