EDITORIAL: Voters should take action for gender equality at the polls 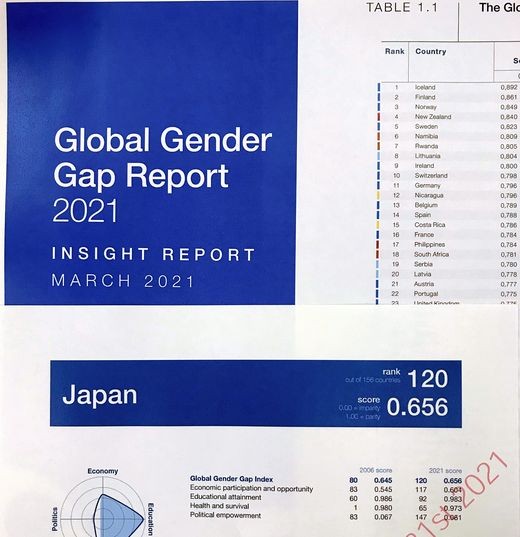 Japanese women have been told to learn how to behave. Their scores on university entrance examinations have been lowered solely because they are women.

They have been the first to lose their jobs after the Japanese economy was pummeled by the new coronavirus pandemic.

Women in this society have faced all these inequities and injustices over years. Even more disturbing is that these revelations about deep-rooted sexism have not led to any significant changes in the situation.

Japan is ranked 120th out of the 156 nations covered in the differences between women and men in social, political, economic and other attainments or attitudes. Japan moved up just one notch on the list from its record-low 121st ranking in the forum’s last study, in December 2019.

More distressing than such a low gender equality score given by a foreign observer, however, are the rigidities in Japanese society that have kept the nation from taking effective actions to address the problem while pretending to be concerned about it.

We should ask ourselves how long we are going to tolerate the gender inequality woven deep into the fabric of society.

Political leaders have clearly failed to take steps to fix the problem. The ratios of women among members of Japan’s Diet and Cabinet are among the lowest in the world.

So many of the social systems in this nation are male-oriented ones, from the civil code rule banning married couples from using separate surnames to regulations concerning harassment.

Three years ago, a law was enacted to urge political parties to field equal numbers of male and female candidates for national and local elections. But women accounted for only 15 percent of the ruling Liberal Democratic Party’s candidates for the Upper House poll held under the law.

If this law is ineffective because it only calls for efforts to meet the target without legally requiring its attainment, some provisions should be added to make it mandatory to attain the goal.

It is time for the Diet to consider introducing a quota system that requires a minimum ratio of women among candidates for elections or legislators.

More than 120 countries have adopted this approach, including France, which established “loi partie” (parity law) in 2000, legislation for political parity to ensure equal access to political representation for both men and women. The law has done a lot to promote gender equality in French politics.

Until then, the situation in France was not much better than in Japan. The principal obstacle to progress in Japan has been the mindset among Japanese politicians that rejects change and puts the vested interests of incumbents and alliances and demands within parties before the moral imperative of equality.

The first Lower House election since the enactment of the law for gender equality among candidates is to be held by October. This poll will pose a major test for the commitment of parties to the cause.

The degrees of their commitment to gender equality will be measured by such factors as how many female candidates they field in electoral districts and how many women will be given high positions in their lists of candidates for the proportional representation portion of the election.

At the root of Japan’s failure to change is probably voter indifference to the problem and their resignation to the reality.

But the COVID-19 pandemic has taught us the importance of diverse discussions that link people’s lives to politics.

To ensure effective policy responses to calls for policy measures to tackle issues concerning child rearing and nursing care common to both men and women, voters need to pay serious attention to the stances of parties to the problem of gender equality as they make their decisions at the polls.

Many other countries have made great strides in embracing gender equality. Finland’s female prime minister took a child-bearing and rearing leave while serving as a parliament member. New Zealand’s prime minister gave birth to a baby in 2018.

One important indicator of the quality of society is whether it has systems that allow both men and women in any job category to place equal weight on their work and private life.

It is crucial for Japanese voters to make their voices heard and take actions in calling for a society where every member can feel comfortable about pursuing whatever lifestyle and career goal they may choose.